In 2011 Christie’s New York sold a Peucetian stamnos that had already been identified in the seized photo archive of convicted illicit antiquities dealer Gianfranco Becchina. On 26 May 2015, the stamnos was repatriated to Italy.

In early 2011 Christie’s auction house announced that an antiquities auction was scheduled to take place on 7 December 2011 in New York. When in early November 2011 Christie’s uploaded the online catalogue, Dr. Christos Tsirogiannis identified in the electronic version of the auction catalogue lot no. 154 (since removed from their website), a Peucetian stamnos of South Italian origin, as being the same object depicted in a series of photographs in the confiscated archive of the convicted dealer Gianfranco Becchina. 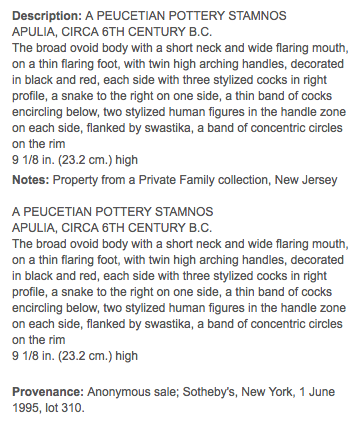 Description of the Peucetian stamnos as presented in Christie’s auction catalogues.

Christie’s estimated the stamnos at $4,000–6,000. The collecting history of the object in Christie’s catalogue was:

In the Becchina archive the stamnos is shown uncleaned and covered with salt encrustations, in a warehouse, standing on a shelf among other uncleaned South Italian antiquities, in several regular photographs. In a handwritten list of objects that is included in the Becchina file entitled ‘RAF 1’, it is clear that the stamnos has been bought by Becchina from Raffaele Monticelli (mentioned in the ‘Organigram’ as a main supplier of Becchina), on 5 March 1988 for 20,000 (presumably Italian lire). The vase also appears in the Becchina file entitled ‘C’, depicting antiquities that Becchina has sold to Christos Michaelides, partner of Robin Symes, but the stamnos is not depicted in the confiscated Symes-Michaelides archive. Therefore, it remains unknown whether Symes and Michaelides acquired the stamnos or not.

On 15 November, 2011, Tsirogiannis notified Italian public prosecutor Paolo Giorgio Ferri regarding the identification of the stamnos as well as other lots being offered that were pictured within the seized Robin Symes – Christos Michaelides photo archive. Based on this information, Ferri wrote a letter to Christie’s concerning the objects. On the day of the auction (7 December 2011) all of the objects identified by Tsirogiannis were sold for much higher prices than their estimation: the stamnos was sold for $9,000. 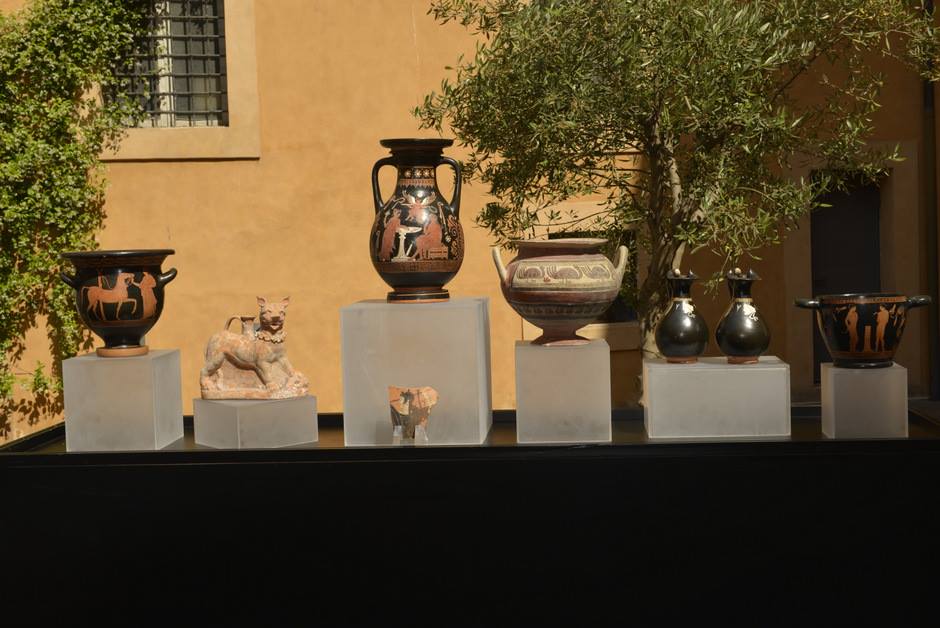 The Peucetian Stamnos (3rd from the right) during the presentation of the 25 repatriated antiquities by the Italian Minister of Culture on 26 May 2015 in Rome.

On 26 May 2015 Mr. Dario Franceschini, the Italian Minister of Culture and Tourism, together with Mr. John R. Phillips, Ambassador of the United States in Italy, Saverio Cotticelli, general of the Italian Police, and Mariano Mossa, commander of the Carabinieri Art Squad, announced in Rome the repatriation of 25 cultural objects (most of them antiquities) from the United States to Italy.

Among the 25 objects was the Peucetian stamnos. The announcement stated that the Peucetian stamnos was identified by the Data Processing Section of Carabinieri and the repatriation of the 25 objects was made possible with the cooperation of the Homeland Security Investigations-Immigration and Customs Enforcement (ICE) of the United States. The name of the owner of the stamnos at the time of confiscation has not been made public. None of the other objects identified by Tsirogiannis in the 2011 Christie’s auction were included in the 25 repatriated objects.

For the full announcement by the Italian Ministry of Culture and Tourism see: http://www.beniculturali.it/mibac/export/MiBAC/sito-MiBAC/Contenuti/MibacUnif/Comunicati/visualizza_asset.html_649573778.html