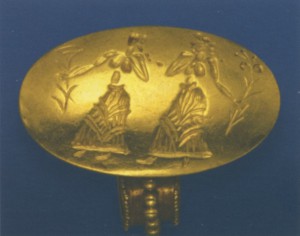 The Aidonia Treasure is a collection of Mycenaean gold and jewelry returned to Greece in 1996 and thought to have been robbed from a cemetery at Aidonia in the late 1970s.

Aidonia is a village ten kilometres northwest of Nemea in the northeastern Peloponnesian district of Corinthia in Greece. In November 1976, a Mycenaean (fifteenth-century BC) cemetery was discovered not far from the village, and the tombs were dug out illegally by local archaiokapiloi (a term used for looters in Greece) (Miller 1997: 40; Waxman 2007: 347). There were reports of a gun battle between rival gangs of archaiokapiloi, and evidence that local government officials had sanctioned and even participated in the plunder (Miller 1997: 43; Waxman 2008: 347). Looted objects were rumoured to have been smuggled out of Greece hidden in watermelons (Miller 1997: 41).

In November 1977, the Greek Archaeological Service assigned a guard to the site, and in Spring 1978 it commenced official excavations. Twenty chamber tombs were discovered, but only two had survived untouched. The remaining eighteen tombs had been largely emptied of their contents, though in one (Tomb 7), the looters had overlooked a pit dug into the floor of the tomb. After excavation, it was found to contain an assemblage of gold jewelry (Krystalli-Votsi 1996). (Mycenaean chamber tombs typically contain several interments and may be richly furnished with pottery, metalwork and jewelry).

Nothing much was heard outside Greece about the plundered Aidonia cemetery until April 1993, when New York’s Michael Ward Gallery offered on display for sale a collection comprising approximately fifty items of Mycenean gold jewelry and sealstones. A catalogue accompanying the display entitled Gold of the Mycenaeans, with an introduction and object descriptions by archaeologist John Betts, could only offer ‘a European collector’ for provenance. Potential customers were reassured by the catalogue, however, that gold analyses conducted by Jack Ogden of the Cambridge Centre for Precious Metal Research had guaranteed the authenticity of the material, and that in reply to a written enquiry the Greek Ministry of Culture had confirmed that the material was not stolen (Elia 1995: 121). The asking price for the assemblage was US$1.5 million (Elia 1995: 120).

On 4 April 1993, the display was trailed in the New York Times, where the objects were described as ‘rare gold baubles: small, ancient and radiant’ (Reif 1993a). Two days later, on 6 April, archaeologist Ricardo Elia alerted the Consul General of Greece in New York to the material on display (Elia 1995: 126, note 17; Honan 1993). On 27 April 1993, archaeologist James Wright, who had worked at Nemea, informed the Greek Archaeological Service of his suspicion that the material might have been looted from Aidonia (Elia 1995: 126, note 17). After obtaining a copy of the catalogue, the Greek Ministry of Culture convened a committee of experts to investigate the possible origin of the material. The committee concluded that because of close stylistic and technical affinities between objects excavated legitimately at Aidonia and those offered for sale in New York, the New York material must have been looted from Aidonia. The Ministry of Culture also recognized that it had received a letter in 1992 from an Athenian lawyer asking for information about the objects, though not mentioning the name of Michael Ward. The Ministry had responded that while there was no evidence to show that the material had been illegally excavated or stolen from a museum, if any such evidence should become available then Greece reserved the right to ask for the material’s return (Elia 1995: 121).

On 14 May 1993, attorneys acting on behalf of Greece notified Ward that the material was the property of Greece and asked for its return (Elia 1991: 122). On 25 May they obtained an injunction from the US District Court, Southern District of New York, preventing the sale or transport out the state of the material, and sued for its return (Elia 1995: 122; Ehl 1998: 675). On 30 December 1993, an out-of-court settlement was announced whereby Ward undertook to donate the material to the US-based Society for the Preservation of the Greek Heritage (SPGH). By donating the material to the charitable SPGH instead of directly to Greece, Ward was able to claim a tax deduction for the purchase price of the material, said to be $150,000 (Walsh 1996). Because Ward was a dealer, he was limited to claiming the cost to himself of acquiring the material. If he had been a collector, he would have been able to claim its fair market value, thought by Ward to be $1.5 million (Ehl 1998: 676-7). The SPGH returned the material to Greece in 1996 (Howland 1996; Walsh 1996).

The settlement between Greece and Ward was welcomed by some commentators, but there have also been expressions of regret that the case never proceeded to court. On the positive side, the settlement secured the return of what was most likely illicit material to Greece. Ward avoided the large financial loss that he would have incurred if the court had decided against his ownership. Both sides minimized their legal fees. By settling out-of-court, however, any information possessed by Ward about the material’s provenance remained a private matter. It is thought unlikely that the material offered by Ward and recovered by Greece represents the totality of the material looted from Aidonia. There was no pottery, for example. Without more information about provenance, there is little hope of locating and recovering the remainder (Elia 1995:123).

In the absence of reliable provenance, it has also been argued that the source of the recovered material is far from definite. The Aidonia provenience was established on the basis of stylistic and technical similarities, but while these similarities might suggest an area of common manufacture, they do not necessarily indicate a place of joint deposition. The objects acquired by Ward might possibly have been found elsewhere. If the case had gone to court, uncertainties surrounding the method used to establish source would probably have been exploited, and it is possible that they would have fatally undermined Greece’s case (Fitzpatrick 1996: 57). These lingering doubts about source also make it potentially misleading to lump together the material obtained through legitimate excavation with that recovered from Ward as a singular ‘treasure’ (Cherry 1999: 109). Again, if the provenance of the material had been resolved in a court of law, using evidence apart from that of the objects themselves, the status of the ‘treasure’ would have been made more secure, to the benefit of archaeological scholarship.

Ward later claimed that Greece had concocted a provenance and that US archaeologists had embarrassed Greece into taking action (Marks 2005: 194). After the looting had ended, the residents of Aidonia fell to feuding amongst themselves, and the village was largely abandoned (Waxman 2008: 348). New tombs are believed to have been robbed there in 2002 and 2004 (Brodie and Apostolidis 2007: 49). The Greek journalist Nikos Zirganos has compared what happened at Aidonia unfavourably to nearby Nemea, where finds from a long-term programme of archaeological excavation and research are curated in a purpose-built museum for the benefit of the general public (Waxman 2007: 348).

Krystalli-Votsi, Kalliope (1996), ‘The excavation of the Mycenaean cemetery at Aidonia’, in Katie Demakopoulou (ed.), The Aidonia Treasure: Seals and Jewellery of the Aegean Late Bronze Age (Athens: Ministry of Culture, Archaeological receipts Fund), 21-31.

Miller, Stephen G. (1996), ‘There is no place like home for our heritage’, in Howland, Richard H. (ed.), Mycenaean Treasures of the Aegean Bronze Age Repatriated (Washington DC: Society for the Preservation of Greek Heritage), 33-50.