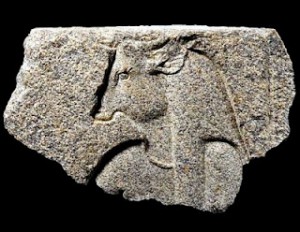 (Photo: comparable looted Behbeit el-Hagar relief returned from the UK to Egypt in 2011)

Lot 294 in the Christie’s New York 12 June 2002 Antiquities catalogue was described as a Late Period Egyptian granite relief, 38.3 cm high No provenance was provided. Egyptologist Christine Favard-Meeks recognized from her own photographic documentation of the site that the piece was a fragment of wall relief from the temple of Isis at Behbeit el-Hagar, built during the reign of Pharoah Nectanebo II (360-341 BC). The relief fragment had been stolen sometime in 1990 (El-Aref 2002; Pogrebin 2004). Egypt’s Supreme Council of Antiquities notified Christie’s and US Customs and Immigration Enforcement (ICE) of the suspected theft. and Christie’s then withheld the piece from sale until ICE obtained a seizure warrant in 2003. It was returned to Egypt in August 2004.

Other stolen pieces from the temple are believed to have been advertised for sale or auction in 1993, 1995, and 2000, though none has been recovered (Pogrebin 2004).