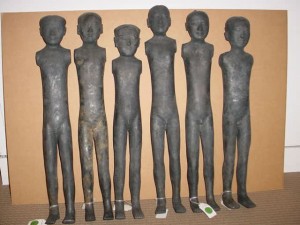 Figurines stolen from Tomb of Empress Dou returned to China by Sotheby’s in 2003.

In April 2001, two people from Baqiao District, Xi’an Prefecture employed five farmers to break into the tomb of the Western Han Empress Dou (who died in 135 BC), which is located in the eastern suburbs of the city of Xi’an, itself in Shaanxi Province. They blasted their way into the tomb with dynamite and then resorted to shovels, but the noise attracted the attention of the local police, who arrived and arrested three people, with the rest escaping (Beech 2003; Xinhua 2003). The 35-metres-deep shaft leading to the tomb was not filled in, however, and in October 2001 another gang visited the tomb, this one from Qishan County, Baoji Prefecture in Shaanxi Province. On their first visit, the members of this gang took away four grey ceramic figurines, which they later sold for a reported 4,600 yuan ($36) each (Xinhua 2003). Over the next few days, they stole a further 200 ceramic figurines, which netted them approximately 4600 yuan ($554) (Xinhua 2003). During a later visit in December 2001, the same gang stole 71 colour painted figurines (Xinhua 2003).

By February 2002, however, police had made several more arrests, and disrupted the Qishan and other gangs working at the tomb. The police discovered that some figurines had been transported to Hong Kong hidden inside a truckload of new pottery (Beech 2003), while others were recovered in Guangzhou (Xinhua 2003). Many of the Hong Kong pieces were also returned to Xi’an.

The grey coloured figurines are unusual, and in March 2002 a Chinese police officer recognized six of them for sale as lot 32 in Sotheby’s New York Fine Chinese Ceramics and Works of Art catalogue. The Chinese Embassy in Washington DC contacted staff at Sotheby’s, who withdrew the pieces from sale. US Customs then arranged for their return to China in July 2003 (Beech 2003; Xinhua 2003).