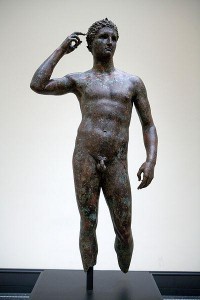 The Fano Bronze is a bronze statue currently owned by the J. Paul Getty Museum (Victorious Youth, 77.AB.30) but subject to an Italian claim for repatriation.

The statue, dating to 300-100 BC, is of a youth crowning himself with a wreath, presumably soon after winning an athletics contest, probably the Olympic Games (Mattusch 1997). The statue was broken off from its base just above its ankles sometime before discovery, and is thought to have been lost at sea when a cargo boat carrying it from Greece to Italy foundered in antiquity. The statue was discovered in 1964, caught up in the nets of a fishing boat working out of the port of Fano on the Adriatic coast of Italy. Upon the boat’s return to Fano, the crew sold the statue for 3.5 million lira, about USD $4,000 at the time, to local antiquities dealer Giacomo Barbetti (Felch and Frammolino 2011: 12). Barbetti hid the statue in a church in Gubbio with the help of a priest named Giovanni Nagni. Sometime later, the statue was smuggled out of Italy, possibly to Brazil, and then bought in London for $700,000 by a Luxembourg-based consortium called Artemis, headed by German antiquities dealer Heinz Herzer, who moved it to Munich for conservation (Felch and Frammolino 2011: 12). In 1972, Herzer brought the statue to the attention of Bernard Ashmole, who was Keeper of Greek and Roman Antiquities at the British Museum at the time, and Ashmole in turn approached J. Paul Getty about a possible purchase (Felch and Frammolino 2011: 14). Getty explored a purchase and acquisition deal with the Metropolitan Museum, but lost interest in 1974 when he learned of an Italian police investigation into the piece (Felch and Frammolino 2011: 20). Getty died in 1976, and in 1977 the J. Paul Getty Museum bought the statue for $3.95 million (Felch and Frammolino 2011: 25).

In 1966, Barbetti and Nagni were charged and convicted with theft of Italian state property, though the convictions were quashed in 1968 when an appeals court judged that there was no evidence to suggest that the statue had been found in Italian territorial waters (Felch and Frammolino 2011: 13).

In 2006, the statue was included on a list of artefacts claimed by Italy for return on the grounds that they had been stolen and smuggled out of Italy. Although the Getty agreed to return 26 objects, it refused to return the statue, arguing that it had been found in international waters and acquired by the Getty only after the Italian appeals court in 1968 had determined that it was not state property (Getty 2006). An Italian judge’s call for its seizure and return in 2010 was similarly rebuffed (Getty 2010).