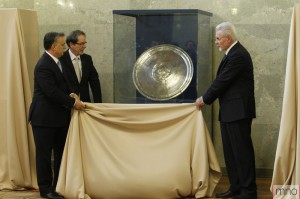 The Hungarian claim on the Sevso Treasure is based on two lines of evidence, the first archaeological, and the second arising out of a police investigation into the 1980 death of Hungarian national József Sümegh. The legal basis of the claim is a 1963 Hungarian law that declares important cultural objects to be State property at the time of their discovery (Hajdú 2012: 27).

There is a scholarly opinion that the Sevso or Hunting Plate was made for an important Roman official (Sevso) living in the area of Lake Balaton in western Hungary, perhaps resident or owner of the archaeologically excavated villa at Szabadbattyán (Painter 1990: 6; Visy 2012: 10; Nádorfi 2012). Further albeit circumstantial evidence has been adduced to support the idea that the silver was not only used but also deposited and discovered in the same area. In May 1878, ten pieces of a Roman-period silver folding stand were discovered close to the village of Polgárdi, 16 kilometres east of Lake Balaton, and donated to the Hungarian National Museum. Originally thought to comprise the remains of a folding tripod (Nagy and Tóth 1990: 9), in 2002 the pieces were shown to be the surviving parts of a folding, four-legged tetrapod stand (Mráv 2012: 80–83). In terms of date, material and decoration, the stand bears comparison to some pieces of the Sevso Treasure, particularly the pair of geometric ewers, and they might all have been manufactured in the same workshop, perhaps one located in the Balkan peninsula (M. Zsolt 2012: 89, 92). Functionally, the stand complements the Sevso assemblage. It was designed to support silver bowls or plates, such as the Sevso ones, and indeed there are abrasions underneath the rim of the Sevso Meleagus Plate that might attest to the use of a stand (Mango and Bennett 1994: 151; Mráv 2012: 94). While close affinities of material and decoration and complementarity of function cannot establish direct association, the evidence is nevertheless suggestive. The Treasure and the stand may have been buried at separate locations during the time of a major barbarian incursion in 374 AD, or perhaps later (Tóth 2012: 73).

József Sümegh was found dead in 1980, hanging by the neck from a ceiling beam of a wine cellar, not far from where the remains of the Polgárdi tetrapod had been found (Hajdú 2012: 30; Landesman 2001). Although his death had been declared suicide in 1980, investigations re-opened in 1990 at the request of Sümegh’s father (Hadjú 2012: 30). After reviewing the evidence and taking new witness statements, the police established that Sümegh had probably been murdered, and began searching for possible motives. Neighbours and friends reported that in 1977 Sümegh had come into possession of a large sum of money, most likely from the sale of two pieces of silver to an antiquities dealer in Budapest. The police came to believe that Sümegh had found the Sevso Treasure in the mid to late 1970s, probably somewhere close to Polgárdi, and had hidden it in the wine cellar, where the police discovered a back-filled hole. After excavation, this hole was shown to conform to the dimensions of the Sevso cauldron, which is believed to have contained the silver (Hadjú 2012: 30; Landesman 2001). Sometime after the reported sale of the first two pieces of silver in 1977, the police believe that Sümegh returned to the cellar with two unknown people, probably with a view to arranging the sale of more or all of the silver, only for them to murder him and steal it (Hadjú 2012: 31).

The Hungarian claim was rejected by the New York State Supreme Court in November 1993 in favour of the Marquess of Northampton who was the then owner of the Treasure, though the Hungarian authorities have since complained that their case was not given a fair hearing. The court disallowed any testimony regarding the Polgárdi stand (Hajdú 2012: 29), and did not admit the results of soil analyses conducted by British experts hired by Croatia, which are said to have matched a small sample of soil taken from the Meleagros Plate to soil in the wine cellar, where Hungarian police believe the Treasure was hidden by Sümegh (Hajdú 2012: 29–30; Kurzweil et al 2005: 87). Furthermore, the testimony of witnesses called by Hungary in support of the police investigation was discredited (Kurzweil et al 2005: 89–91). Northampton’s lawyers have since commented that Hungary’s failure to call any of Sümegh’s close family as witnesses was particularly damaging to its case, particularly as they had all sworn to never having seen him with the silver (Kurzweil et al. 2005: 91). Since the court case, however, József Sümegh’s younger half-brother Ishtevan has been reported as saying that he does remember József with the Treasure, and helped him clean it (Landesman 2001: xii). Northampton’s lawyers have discounted this later testimony as conflicting with the earlier sworn statement (Kurzweil et al 2005: 92–93), though it should be remembered that at the time of his earlier statement, Ishtevan believed his life to be in danger because of what he knew about the silver (Landesman 2001: xii).

Northampton’s lawyers continue to be dismissive of the Hungarian case (de Walden 2006; Kurzweil et al. 2005: 92–93), and in March 2014 it was announced that Hungary had bought seven pieces of the Treasure for €15 million from a trust in the name Peter Wilson’s two sons. Wilson, who died in 1984, was an ex-chairman of Sotheby’s and had first encouraged Northampton to purchase the silver. It seems that ownership of the Treasure was divided in 2008 between Northampton and Wilson’s sons. (Bailey 2014).

Landesman, Peter (2001), ‘The curse of the Sevso silver’, The Atlantic, November