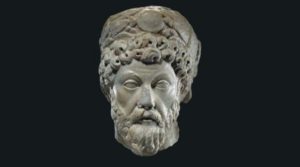 In 2004, Christie’s New York featured on the front cover of its 8 June Antiquities auction catalogue a late-second-century AD marble head of the Roman emperor Marcus Aurelius. Offered as lot 69, the provenance of the head was given as ‘with N. Koutoulakis, Paris, circa late 1940s’. Interpol and the Art Loss Register recognized the head as being one of nine pieces stolen from a museum in Skikda, Algeria in 1996. The head was seized by US Immigration and Customs Enforcement and returned to Algeria in January 2008 (ICE 2008, 2010).