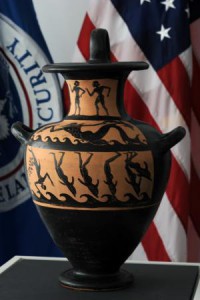 The Italian investigations of dealers Giacomo Medici and Gianfranco Becchina had uncovered evidence that the kalpis was smuggled out of Italy prior to 1981 in contravention of that country’s 1939 patrimony law (ICE 2013). Medici had taken the piece to Switzerland, where he sold it to Becchina. Becchina had then devised a false provenance to pass off the piece to the Toledo Museum as a legitimate acquisition. He provided a document from an alleged hotel owner, Mr K. Haug, typewritten on hotel stationery, stating that Haug had inherited the piece from his father, who had in turn bought it on the art market in 1935 (Lane 2012; USA 2012). It transpired that Haug had in reality been the previous owner of Becchina’s gallery, Antike Kunst Palladion, located in Basel (USA 2012). The Italian investigators also established that Becchina had used a similar false provenance for other artefacts (USA 2012). Polaroids of the piece were found during police searches of the storerooms of both Medici and Becchina (USA 2012).