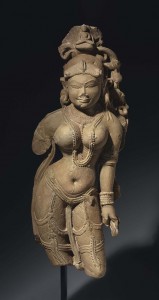 In June 2003 police raided the home of Vaman Ghiya in Jaipur (Rajasthan, India), seizing hundreds of photographs of sculptures that appeared to have been forcibly removed from Hindu temple architecture. Over the following few days the police raided a further six of his properties in Jaipur as well as storage facilities in Mathura and Delhi, altogether seizing approximately 900 antiques and antiquities. Ghiya was charged with possessing and trafficking stolen cultural property (Barnett 2003; Keefe 2007).

Ghiya was proprietor of a large handicrafts saleroom in Jaipur, but the police placed him at the centre of a smuggling network that extended from rural India to the antiquities salerooms of London and New York. After a year-long investigation into his activities, the police claimed to have established that Ghiya had been purchasing stolen or looted objects from a network of intermediaries. These intermediaries were in turn obtaining material from thieves who removed it from temples or other cultural sites and institutions. Ghiya would then store material in Jaipur, Mathura or Delhi while arranging shipment abroad of objects, describing them on export documentation as handicrafts (Barnett 2003; Keefe 2007).

Ghiya began selling antiquities in the late 1970s (Keefe 2007), and by the early 1980s he was consigning material to Sotheby’s London. Under police questioning, Ghiya confessed to shipping material to Geneva (Barnett 2003), where it was known he maintained three front companies (Cape Lion Logging, Megavena and Artistic Imports Corporation). These companies would transact material amongst themselves to hide any trail of illicit trade, before selling objects on to other dealers and customers, including Sotheby’s, as revealed by Peter Watson (1997: 253). Between 1984 and 1986, Cape Lion Logging and Megavena between them consigned 93 lots to Sotheby’s, with a combined value in the region of £58,000 (Watson 1997: 253). To return his money to India, Ghiya had access to British bank accounts opened by a Sotheby’s employee in the invented names of A. Yarrow and H.C. Banks for use by foreign customers (Barnett 2003), and he also used the international Hawala remittance system, which allows the paperless transfer of money (Keefe 2007). So profitable was the relationship for Sotheby’s that in 1986, the company proposed that their India expert Brendan Lynch should visit Ghiya twice a year, at Ghiya’s expense, to discuss what objects might be suitable for sale at Sotheby’s and to set reserve prices (Barnett 2003; Keefe 2007).

After Watson (1997) exposed the link between Ghiya and Sotheby’s, Lynch left the company by mutual agreement and Sotheby’s transferred their South Asian sales from London to New York (Farrell and Alberge 1997; Keefe 2007), claiming to have stopped accepting consignments from Ghiya (Keefe 2007). Nevertheless, Indian police alleged that lot 135 sold on 22 September 2000 at Sotheby’s New York, described in the catalogue as a red sandstone figure of a Jina, circa twelfth century, had been stolen from Vilasgarh temple in 1999 and passed through the hands of Ghiya (Barnett 2003; Keefe 2007). Sotheby’s denied that the piece had been consigned by Ghiya (Keefe 2007). Ghiya himself claimed to have continued selling material through Christie’s auction house after 1997 (Keefe 2007).

Ghiya was convicted in 2008 and sentenced to life imprisonment, though it was reported in January 2014 that the conviction had been quashed by an appeals court because of procedural irregularities during the police prosecution (DNA 2014). The appeals court also ruled, however, that the seized material should not be returned to Ghiya. It should either be restored where possible to the dispossessed temples, or failing that, the Archaeological Survey of India should arrange for authentic material to go on display in a public museum (DNA 2014).