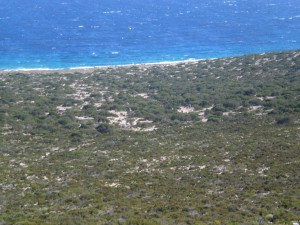 The use of pedestrian survey to identify, date, and characterise a region’s archaeological sites from the evidence of their surface manifestations is now a well-established method for investigating long-term trends in human settlement and land exploitation. Over a period of weeks, small teams of researchers systematically and comprehensively walk a pre-defined area of land, noting and describing features of archaeological interest. The total area walked depends upon several factors, including the nature of the terrain and of the archaeological remains, available time and money, and research goals. Usually, the methodology is designed to achieve maximum ground coverage within limits imposed by constraints of resources and environment. So far, only a few surveys have quantified the evidence of site damage or destruction caused by looting. Personal experience suggests there is a general reluctance to incorporate even simple recording protocols into survey methodologies. This is, perhaps, born out of a belief that such surveys are intended to record the material remains of a region’s past societies, not the damage caused by its recent inhabitants, which can be viewed more as an obstacle to research than as a legitimate research object in its own right. There are often concerns too about local sensitivities.

Nevertheless, the results of those surveys that have recorded and investigated indications of looting as part of their broader methodology are revealing. Between 1989 and 1992, for example, a survey of the Djenné area of the Inner Niger Delta area of Mali (Project Togué) discovered 834 archaeological sites, but by the time of discovery 375 sites (45 percent) had already been damaged by illegal digging, 142 badly. Two sites had been completely destroyed. In 1996, eighty-three sites in two parts of the surveyed area were revisited and the number looted had increased from 16 (19 percent) to 49 (59 percent). Similar results were obtained in 2002 by a survey of 81 sites in another area of Mali, around the town of Dia, which discovered that 42 sites (52 percent) showed evidence of illegal digging, 30 had been badly damaged and one completely destroyed (Panella et al. 2005: 18 table 1.3.2). The publication of the survey results was accompanied by a tentative chronology of the looting (Panella et al. 2005: 17).

A survey of burial tumuli in the area of western Turkey that comprised the iron age kingdom of Lydia recorded 397 tumuli; 357 tumuli (90 percent) showed signs of looting and 52 had been completely destroyed. To this figure of 52 could be added a further 20 previously-known tumuli that had disappeared (Roosevelt and Luke 2006a, 178-179). A follow-up survey of 116 tumuli in the area of Bin Tepe, probably the royal burial ground of Sardis, the capital of Lydia, confirmed the earlier findings, with 111 tumuli (96 percent) showing signs of illegal excavation, and 11 badly scarred by bulldozers or other heavy earth-moving equipment (Roosevelt and Luke 2006b, 193).

Repeat surveys such as those conducted in Mali and Turkey are important because they provide quantitative data describing the location, extent and severity of archaeological looting, its development through time, and the kind of material likely to have been looted. Data of this sort can be used to inform and assess mitigating policy countermeasures. Unfortunately, repeat surveys are expensive, so that even when project directors are favourably inclined towards engaging with the material damage caused by looting, they remain the exception rather than the rule. Quantification of damage by means of remote sensing techniques, particularly by use of satellite imagery, offers a cheaper, though more coarse-grained alternative.

Some surface surveys have been aimed specifically at recording damage caused by looting. In 1983, for example, one study showed that 58.6 percent of all Maya sites in Belize had been damaged by looting (Gutchen 1983). In 1994, a survey in Charsadda district of northern Pakistan showed that nearly half the Buddhist shrines, stupas, and monasteries had been badly damaged or destroyed by illegal excavations (Ali and Coningham 1998). In 2000, the Documentation Centre of the Andalusian Institute of the Historical Heritage estimated that 14 percent of known archaeological sites in Andalusia, Spain, had been damaged by illicit excavation (Fernandez Cacho and Sanjuán 2000).

The possibilities of on-line databases for documenting site damage have hardly been explored, though one notable enterprise is the non-affiliated Türkiye Arkeolojik Yerleşmeleri / Archaeological Settlements of Turkey (TAY) project, established in 1993. Its central aim is to visit and document all archaeological sites within Turkey and to record their condition, in Turkish and English (http://www.tayproject.org/enghome.html). As of July 2012, over 4,900 archaeological sites had been documented. Information is published on-line in a series of regional files, each file recording the number of sites visited according to period and type, and describing the various causes of damage. So, for example, in July 2012, the Mediterranean file contained 394 sites, visited between June-August 2001 (http://www.tayproject.org/dosyaakdeng.html). The largest cause of damage to those sites was agriculture, though seventy-two had been affected by illegal digging. There is also a database searchable according to several criteria that records information about individual sites. For example, the record on the early bronze age site of Alacahöyük accessed in July 2012 contained numerous photographs and noted that it had been subject to illicit digging (http://www.tayproject.org/TAYmaster.fm$Retrieve?YerlesmeNo=115&html=masterengdetail.html&layout=web). The website also contains a useful record of archaeological publication, tabulating excavations conducted and date of final publication, providing perhaps for the first time a quantitative analysis of the poor state of archaeological publication (http://www.tayproject.org/kazilar_e.htm).