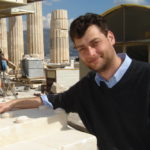 Dr. Christos Tsirogiannis’ work has been featured on The History Channel’s website:

In August 2004, Christos Tsirogiannis got a message that would change his life. Would he be interested in accompanying the Athens police on a raid? It might not seem like a job for an archaeologist, but police told him they might need his expertise once they got there. He agreed, got in an unmarked SUV, and headed with police to a monastery outside the city.