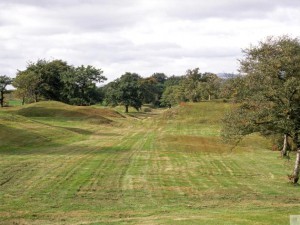 Nighthawking (illegal metal detecting) seems to be relatively rare in Scotland compared to south of the border in England, with only four known instances identified in the whole country in a UK-wide survey in 2009, a mere 2% of the total recorded instances by the survey (Oxford Archaeology 2009: 40). The report acknowledged that this low figure may be at least in part due to under-reporting (Oxford Archaeology 2009: 91), and the possibility remains of a much greater number of incidents taking place completely undetected by the authorities. However, it is also true that there are far fewer active metal-detector users, law-abiding or otherwise, in Scotland compared to England and Wales (Thomas 2012: 59-60). It should also be noted that Scotland has different legislation relating to Treasure Trove than England and Wales, where the Treasure Act 1996 is in force.

The Antonine Wall in is a Roman frontier stretching from Bo’ness on the River Firth in the East to Old Kilpatrick on the River Clyde in the West, built in the years following 142 AD (Historic Scotland 2012). In 2008, it was inscribed to the UNESCO World Heritage List as part of the Frontiers of the Roman Empire World Heritage Site (Historic Scotland 2012.).

An entry on Canmore, the database of the Royal Commission on the Ancient and Historic Monuments of Scotland (RCAHMS), reports the discovery in 1995 at Rough Castle, a Roman fort on the Antonine Wall, of a ‘heavily-corroded Roman iron axehead’, apparently discarded after illegal metal detecting. This subsequently went to the Falkirk Museum (Canmore 2011). Oxford Archaeology (2009: 42) also noted that one of the four instances that it recorded for nighthawking in Scotland occurred at a Roman fort along the Antonine Wall.

In May 2007, signs of metal detecting in Peel Park in East Dumbartonshire were reported to Historic Scotland and the local authority by a concerned member of the public. The Antonine Wall runs through the park. The informant provided Historic Scotland with photographs of a number of small holes having been dug (these were spade-size squares), with the turf subsequently replaced. These photographs were sent to Strathclyde Police who investigated the incident. In July 2007, Historic Scotland was informed that the police had cautioned a person in Peel Park who had been caught with a metal detector; the individual claimed that he was unaware that it was a protected area. Later that year in November, Historic Scotland attended a meeting with Strathclyde Police and representatives of East Dunbartonshire Council, and subsequently provided twelve small signs for erection at agreed locations in Peel Park, advising the public that the area is protected under the Ancient Monuments and Archaeological Areas Act 1979 (Owen 2012).

The whole of the wall includes areas that are vulnerable to different crimes affecting the enjoyment of the environment and its heritage assets, and most recently areas in the vicinity of the Antonine Wall in the Cumbernauld area, including some kissing gates on the wall itself, have been victim to the growing problem across the UK of metal theft (Mullen 2012).