Trafficking Culture have been given permission to reproduce the images used for a new deck of playing cards commissioned and developed by Kulturådet (Arts Council Norway), Riksantikvaren (Directorate for Cultural Heritage), ICOM Norway, Blue Shield Norway and the Norwegian Armed Forces. These participating organisations hold copyright for the cards, which were produced in 2012. 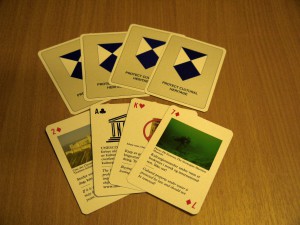 Selection of the playing cards

The intention is to use the cards as a means of raising awareness of the potential threats to cultural heritage, and also offer practical advice, such as how to help limit damage to sites in times of conflict, what international conventions are in place, and even objects to avoid purchasing due to the likelihood that they were originally looted.

The cards were made available at a travel fair in Oslo in early 2013, and are to be distributed to Norwegian international forces, customs and police.

Arts Council Norway also produced a report on import and export, following a grant from the European Economic Area.

View the pdfs of the playing cards.