Photographs from the archive confiscated from antiquities dealer Giacomo Medici in Geneva on 13 September 1995 (Watson and Todeschini 2007:20) enabled Dr Christos Tsirogiannis to identify four antiquities published in a Christie’s catalogue for an auction scheduled to take place on 8 June 2012 in New York.

Two of these objects were Canosan volute kraters (Christie’s 2012, lot 99), which matched two Polaroid images in the archive (Figures 1 and 2). In the Medici Polaroids, the two kraters are depicted in front of a black cloth, a background which brings out their decoration, but they are unclean and missing parts of their bases; one of them is also missing a piece of its rim (Figure 1). The number printed on the back of each Polaroid image is identical, proof that the two kraters were photographed with the same film. It is also an indication that the objects arrived together and passed as a pair through the hands of Medici.

When the Paris flat of antiquities dealer Robert Hecht was raided on 16 February 2001 by the French and Italian authorities (Watson and Todeschini 2007:156-162), two regular-print images depicting the same two Canosan kraters were discovered among other images, antiquities, and Hecht’s memoir. The images depicted the two kraters cleaned, with their bases and the missing piece of the rim conserved (Figures. 3 and 4). 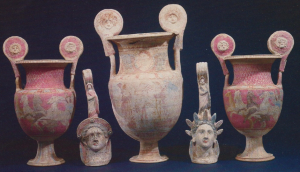 The same two kraters appeared as a pair in Sotheby’s Antiquities and Islamic Works of Art auction of 30 May 1986 in New York (Sotheby’s 1986, lot 24). Sotheby’s published no previous collecting history or the name of the consigner; the kraters appeared in a section of the Sotheby’s catalogue under the title “Other Properties”. They were depicted in a single image (Figure 5), framing a bigger Canosan polychrome volute krater (lot 23) and two Canosan polychrome funerary vases (lots 26 and 27). All these vases, including the pair of kraters, were presented as “Apulian”. The two kraters were estimated at $6,000-9,000 and were sold for $14,300 (including buyer’s premium), according to an email from Andrew Gully (Worldwide Director of Communications at Sotheby’s) on 2 January 2013 to Dr Tsirogiannis. To Dr Tsirogiannis’ inquiry (email 26 December 2012) about the names of the consigner and the buyer of the kraters, Mr Gully replied:

Sotheby’s does not disclose the names of consigners or buyers. 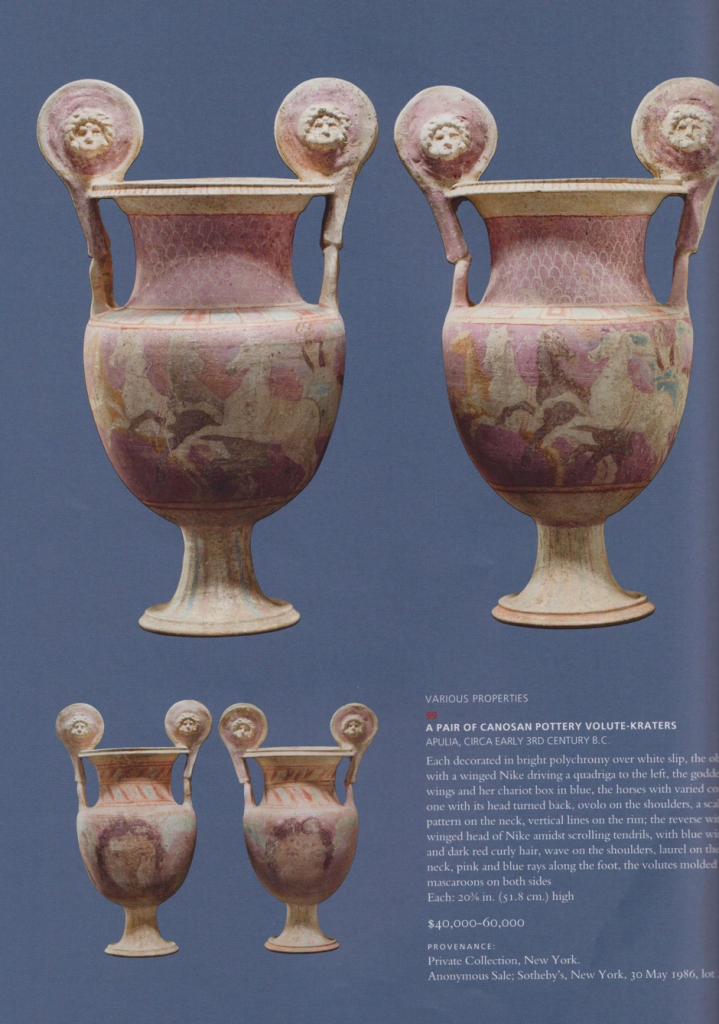 Figure 6: The two Canosan volute kraters (no. 1 top left, no. 2 top right) as lot 99 in Christie’s Antiquities auction of 8 June 2012 in New York. At the bottom of the page their reverse sides are depicted, but swapped left and right.

The same pair of volute kraters (this time correctly labelled “Canosan”) appeared in the Christie’s auction of 8 June 2012 (Figure 6) in New York (Christie’s 2012a:82, lot 99), in the same condition as that in which they were presented 26 years earlier by Sotheby’s. In their catalogue Christie’s gave the following collecting history:

To Dr Tsirogiannis’ inquiry (email 29 December 2012) about the consigner of the kraters, if s/he was the same as the “Private collection, New York” mentioned in the “Provenance” section and if the objects were returned to the seller since they remained unsold, Mr Max Bernheimer (International Department Head for Antiquities at Christie’s, New York) replied (email 2 January 2013):

Regarding lot 99 from the June 2012 sale, unless a seller decides to be identified in the catalog, the name of the seller remains confidential. The information that the pair came from a “private collection, New York” was passed on from Sotheby’s, who originally sold them in New York in May, 1986. They have been returned to the seller.

The kraters, which had an estimated sale value of $40,000–60,000, remained unsold and, according to Bernheimer’s email, were returned to the seller, without its being clear if the 2012 seller was the same “private collection, New York” which acquired them from Sotheby’s in 1986.

The identification of the two Canosan kraters by Dr Tsirogiannis took place on 17 May 2012 and Italian public prosecutor was immediately notified (email 17 May 2012). The case was reported on 31 May 2012 in Italy and Greece, by Il Messaggero (Isman 2012) and Το Βήμα (Thermou 2012), respectively, but in New York, where the auction took place, the press did not refer to the identification of the kraters.

In September 2012 the two Canosan volute kraters were repatriated to Italy and from 21 May to 5 November 2013 were exhibited at the National Museum of Castel Sant’ Angelo in Rome (Figures 7 and 8), together with other repatriated antiquities (but not lots 65 or 90 identified by Dr Tsirogiannis in the Christie’s 2012 auction with the two kraters, on which see Tsirogiannis 2013:10–11). As in the official notification of return of the Peucetian stamnos, the kraters’ entries in the exhibition catalogue (Landolfi et al. 2013:246–249, nos. 54–55, signed by Alessandra Avagliano), noted only the work of the Carabinieri in recovering the objects.

The Italian authorities never revealed the owner(s) of the kraters who consigned them to the Christie’s 2012 auction and from whom they were repatriated.

Tsirogiannis, Christos. 2015. Something is Confidential in the State of Christie’s. In Charney, N. (ed.), Art Crime: Terrorists, Tomb Raiders, Forgers and Thieves. Palgrave [an updated version of an article originally appearing in The Journal of Art Crime 9 (2013): 3–19].