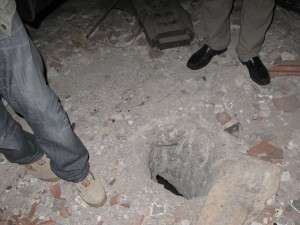 The so-called Benghazi Treasure is a group of antiquities that was excavated in Cyrenaica after the First World War during the Italian occupation of Libya (Bailey 2011).

It consists of three collections of archaeologically excavated material:

1. Objects excavated from the Temple of Artemis in Cyrene in 1917, including a number of gold items, which date to the fifth and sixth centuries BC.

2. Objects excavated from the Palace of Columns in Ptolemais in 1937 which date to the Hellenistic period.

Removal to Italy, Return to Libya

Theft of the Treasure

Approximately three months after rebel took the city of Benghazi during the protracted overthrow of the government of Muammar Gaddafi , much of the Benghazi Treasure was stolen (Bailey 2011). According to Osama El-Ketaf, the head of the National Commercial Bank’s legal office, on 25 May 2011 looters drilled through more than two feet of steel-reinforced concrete directly into the vault that contained the treasure, making a hole that was just large enough for a very skinny adult to fit through (Elkin 2012). ‘They sawed through the hinges of one [safe], maybe using a circular saw. We found an extension cord leading from the building next door to the hole. They cut through the back of the other safe’ (El-Ketaf quoted in Elkin 2012).

Safe that was broken into in the vault, photo from BBC 2011

Mohammed El-Shelmany of the Benghazi office of the Department of Antiquities said that the thieves had left behind about ten percent of the objects originally housed in the vault, taking only the most valuable artefacts (Elkin 2012). During his investigation into the robbery, El-Shelmany located among the remaining antiquities eight sealed boxes containing modern keys. Bank officials stated that these were spares to other banks in the neighborhood that had been stored with the antiquities for safekeeping (Elkin 2012). El-Shelmany wonders why the looters did not bother opening the sealed boxes.

Bank officials did not report the theft until October 2011, over six months later. Some reporters speculated that this was out of fear that Benghazi’s international reputation would suffer as the city fought for international recognition during the overthrow of Gaddafi (Meo 2011). Others have implied that there was a more sinister motive for the bank’s failure to inform authorities (e.g. Elkin 2012).

Hafed Walda, a Libyan archaeologist, was quoted as saying ‘I have the feeling this must have been an inside job. The treasure was there for many years, not many people knew about it, and the robbers even ignored cash that was in the vault’ (Walda, quoted in Meo 2011). Ahmed Buzaian, a professor of archaeology at Benghazi University stated ‘I cannot say who did it, but they knew exactly what was inside’ (Buzaian quoted in Elkin 2012). In response to allegations that bank employees might have been responsible for the theft, El-Ketaf replied ‘it might have been someone at the Department of Antiquities. They all know what was there’ (El-Ketaf quoted in Elkin 2012).

According to UNESCO’s Assistant Director-General for Culture Francesco Bandarin, the main fear is that the metal objects have been melted down and sold (Allsop 2011). Some early reports indicated that 500 coins from the Benghazi Treasure turned up in Egypt and that others have appeared on the black market in Libya (Bailey 2011). Various commentators described the Libya/Egypt border as ‘porous’ at the time of the theft and speculated that this was the route the looted material would take out of Libya (Allsop 2011). Nick Meo of The Telegraph reported that an Egyptian farmer was caught with over 500 coins and a gold figurine that may to have come from the Benghazi Treasure theft (Meo 2011).