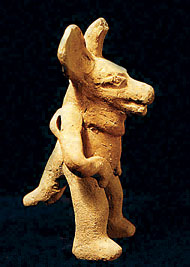 Cara Sucia is a major archaeological site located in western El Salvador near the border with Guatemala in the department of Ahuachapán. It was occupied during the Middle Preclassic through Late Preclassic periods starting around 166 BC, and the Late Classic through to the Terminal Classic periods. Archaeological research has shown that the later phase of occupation at Cara Sucia is strongly associated with the Cotzumalhuapa Culture of the Pacific Coast of Guatemala (Moraga et al. 2010). During this period ‘an acropolis, two ball courts, temples, and rectangular houses were built’ and the site became an important centre for the production of figurines and whistles (Guthrie Hingston 1999: 135).

The site was first recorded in the 19th century by Dr. Santiago Ignacio Barbarena, who reported the discovery of a number of artefacts including a stone jaguar head (Guthrie Hingston 1999: 135). Early interest in objects from Cara Sucia resulted in both small-scale looting and small-scale collecting. Herbert J. Spinden (1915: 454), for example, notes the presence of a figurine ‘accredited to Cara Sucia’ in the collection of a Dr. Alberto Luna of Mexico.

Since 1903, El Salvador has prohibited the export of archaeological objects, an assertion that is supported by the country’s 1973 penal code and 1983 constitution (Guthrie Hingston 1999: 137). Despite this long-standing prohibition against the looting and trafficking of Salvadoran cultural property, ‘the National Commission for Culture and Art (CONCULTURA) and its civil counterpart the National Foundation for Archaeology (FUNDAR), estimate that 90% of the 1500 sites in the country have been looted in response to a series of stimuli including the Salvadoran civil war of the 1980s’ (Parks et al. 2006: 429).

The Looting of Cara Sucia 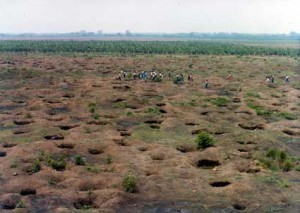 In 1980, El Salvador embarked on a major land reform programme in an effort to develop a rural middle class and twenty-two per cent of Salvadoran farmland was transferred to landless agricultural workers. While the positive and negative aspects of this land reform have been hotly debated within El Salvador, the changes allowed for a shift in the demographics of who had access to unexcavated rural archaeological sites. Following this land reform, the site of Cara Sucia was severely looted. The looting dates to around 1980/1981, and upwards of 6000 looters’ trenches were reported on the ground (Olsen, Bruhns and Amaroli 2011: 35). This highly destructive looting was believed to have been carried out by teams of looters who were specifically looking for stone sculptures, decorated ceramic vessels, figurines, and objects made of jade (Guthrie Hingston 1999: 135). Reports indicate that up to 600 people were looting the site daily and that both food vendors and artefact buyers ’circulated through the crowd to buy artifacts’ (FUNDAR n.d.). The site was fenced and guards were hired in 1982, but by then the damage had already been done (FUNDAR n.d.).

In 1986, Paul Amaroli embarked on a project to document the looting of the Cara Sucia region. In a 2012 interview with the newspaper El Mundo, Amaroli discussed several of his conclusions about looting in Cara Sucia and in the rest of El Salvador (Kiste 2012). Amaroli states that Salvadoran antiquities law is weak compared to other Central American countries and have not aged well over the decades. Those found guilty of the crime of smuggling cultural property face up to four years in prison, however other countries with Maya sites are reportedly able to impose harsher penalties. Amaroli considered the current demand for Salvadoran antiquities to come from the United States, Japan, and Saudi Arabia, and characterised the risks with trafficking in antiquities as being less than those in trafficking in drugs.

Investigations conducted by the Government of El Salvador, Amaroli, and other archaeologists concluded that the majority of the demand for objects from Cara Sucia was in the United States. Salvadoran customs records from the late 1980s indicate that ‘thirty percent of the cases in which artefacts were confiscated [in El Salvador] involved U.S. citizens’ (Guthrie Hingston 1999: 137). At that time, archaeologist Stanley Boggs, who had worked in El Salvador for forty years, claimed that more than 30,000 Salvadoran artefacts were in foreign collections (Guthrie Hingston 1999: 137).

Emergency Import Restrictions and a Bilateral Agreement with the United States

FUNDAR (n.d.), Website of the National Foundation of Archaeology of El Salvador. <http://www.fundar.org.sv> accessed on 22 May.

Parks, Shoshaunna, Patricia A. McAnany and Satoru Murata (2006), ‘The Conservation of Maya Cultural Heritage: Searching for Solutions in a Troubled Region’, Journal of Field Archaeology 31(4) 425–432.