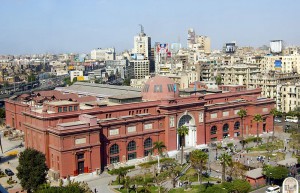 The Egyptian Museum in Cairo found itself in the centre of the 2011 Egyptian uprisings (the wider impact of which for Egypt is discussed in a separate entry), in part due to its location on Tahrir Square, upon which much of the protesting focussed (Anderson 2011). On 28 January 2011, despite apparent attempts to protect the museum and its contents (Butler 2011; El-Aref 2011a), looters and protesters entered the museum – possibly up to 1,000 individuals according reports (Sarant 2011) .

Although looters apparently raided the museum shop for jewellery, smashed display cases, (Sarant 2011) and ransacked the ticket office (ABC News 2011), it was at first unclear exactly what had been taken, with varying reports emerging suggesting different accounts of the damage caused and scale of loss of cultural objects. At the time of the break-in itself, nine individuals were reportedly arrested as they tried to make their way out of the museum via fire exits with the heads of two mummies that they had attempted to steal (but that had subsequently broken up into pieces) (ABC News 2011; Sarant 2011).

The threat to the cultural objects and monuments, not only at the Egyptian Museum itself but at other museums and at archaeological sites across Egypt, was quickly recognised by archaeologists and other observers both within Egypt and further afield. The Archaeological Institute of America (AIA) issued a statement shortly after the break-in which acknowledged that the political circumstances in Cairo in 2011 were different to those surrounding the looting of the Iraq National Museum in 2003, but that nonetheless Egyptian authorities needed to act to protect the country’s universally significant cultural heritage (Archaeological Institute of America 2011).

Other early reports emerged, primarily via the website of the then Minister for Antiquities Dr Zahi Hawass, that while there had been damage caused to up to seventy objects, apparently nothing had been stolen. A later statement from Hawass indicated that a number of objects had in fact been stolen (Taylor 2011a).

In February 2011, a several objects were recovered after apparently being discarded near to the museum. For example, in mid-February a statue of the pharaoh Akhenaten was discovered amid garbage close to Tahrir Square (Taylor 2011b). Around the same time a number of other artefacts, including part of a broken, wooden sarcophagus were all found on the ground to the east of the museum (CNN Wire 2011; El-Aref 2011b). This led to suggestions that more objects would emerge through searching refuse and land in the proximity of the museum (Taylor 2011b).

Further recoveries of objects were made in mid and late March 2011 (Rosenbaum 2011), and in May 2011 four statues were recovered during a ‘police action’, two of which were later confirmed to have come from the Egyptian Museum (Lorenzi 2011). 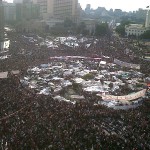