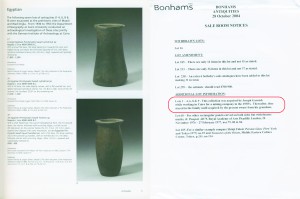 In 2008, a US army helicopter pilot pled guilty to possessing and selling antiquities stolen from an Egyptian storeroom that had been excavated from the site of Ma’adi.

The Egyptian Predynastic (fourth millenium BC) site of Ma’adi on the outskirts of Cairo was archaeologically excavated from the 1930s through to the 1950s, and full publication in a series of monographs is ongoing. Sometime in 2002, seventy artifacts from Ma’adi were reported stolen from a storage facility at Cairo University (Brodie 2005; Sciences et Avenir 2005). Five stone and two ceramic vessels turned up for sale at Bonhams in their October 2004 London ‘Antiquities’ sale (lots 1–4, 6, 8 and 9) and were recognized as being from the Ma’adi theft by Egyptologist Luc Watrin, who alerted Bonhams and stopped their sale. The vessels were said to have been sold to the consignor by the grandson of one Joseph Garnish, who was said in turn to have acquired them while working in Cairo for a mining company in the 1930s. Bonhams arranged with the consignor that the pieces be returned to Egypt, and in February 2005 they were delivered to the Egyptian Embassy in London. The identity of the consignor was not revealed. Another Ma’adi piece was sold for $6,573 USD through Christie’s New York at their June 2004 ‘Antiquities’ sale. It was lot 99, ‘An Egyptian rose granite vessel’, said to have been excavated at Ma’adi and in the Garnish collection since the 1930s. The purchaser (whose name was not revealed) offered the piece on loan to the Metropolitan Museum of Art in New York, whereupon the Metropolitan’s staff recognized the piece as stolen, and arranged with the owner for it to be returned to Egypt.

By 2004, a large number of Ma’adi pots had appeared for sale on various websites. Part of the Ma’adi ceramic assemblage had been studied for publication between 1984 and 1985, at which time the pottery was still in storage at the site (Rizkana and Seeher 1987: 13). Therefore, any pottery from the publication could only have moved out of Egypt illegally after 1983, the date of the Egyptian patrimony law that took archaeological heritage into State ownership. The pots offered for sale on the Internet were advertised with photographs, and sometimes an excavation number was provided, in which cases they were easy to check against the 1987 Rizkana and Seeher publication. One pot, offered for sale by Michigan-based Orpheus Art with the description ‘Predynastic opium poppy vase’ (item no. 90069), had the excavation number 1915 and had been published in Rizkana and Seeher (1987: plate 2.8). Its provenance on the Orpheus website was given as ‘Johnson family collection, excavated in Egypt approx. 1932’. Thus the Garnish–Johnson pedigree was a false provenance constructed to cover the entry onto the market of material illegally exported from Egypt, and any object bearing that provenance must be viewed as suspect. All of the Ma’adi pots offered for sale on the Internet had the same Johnson provenance. By 2005 item no. 90069 had been sold and the Orpheus Art website disappeared from the Internet sometime in 2006.

An apparent link between the Johnson family and Joseph Garnish was provided in 2004 for a pot offered for sale on the website of the Wallis Gallery of Antiquities. The previous owner was identified as the proprietor of Washington DC-based Sands of Time Antiquities, who was said to have acquired the piece in 2003. Sometime previously, the pot was said to have been in the possession of Edward Johnson, the grandson of Joseph Garner (sic.), who supposedly acquired the piece while working on a mining project in Cairo during the 1930s. When the proprietor of the Wallis Gallery became aware of the questionable history of his piece he returned it to Sands of Time. In turn, Sands of Time started working with the Art Loss Register (ALR) to recover material stolen from Ma’adi. The ALR alerted US Immigration and Customs Enforcement (ICE).

In February 2008, ICE announced the arrest of US Army helicopter pilot Edward George Johnson on charges relating to the sale of artifacts from Ma’adi. Johnson had been on active service in Cairo from February to October 2002, where he had been assigned to the US embassy. On his return to the US in January 2003 he had contacted Sue McGovern, proprietor of Sands of Time, claiming that the Ma’adi artifacts which were then in his possession had belonged to his grandfather who had acquired them in Egypt during the 1930s and 1940s. He had used his diplomatic status to facilitate transport of this material, in violation of the 1961 Vienna Convention on Diplomatic Relations (as well as US and Egyptian domestic laws). Johnson did not produce any documentation to support his claimed provenance. Nevertheless, the dealer paid in the region of $20,000 to Johnson for something like 80 pieces, and was subsequently able to sell them (without documented provenance) to other dealers and collectors around the world (ICE 2008a; 2008b; USA 2008).

In July 2008, Johnson pleaded guilty to a misdemeanor charge of possession and selling of stolen antiquities (ICE 2008b). On 3 December, ICE returned 79 artifacts from Ma’adi to Egypt (ICE 2008b).

ICE (2008a), ‘US arrests army pilot for dealing in stolen Egyptian antiquities’, press release, 6 February (US Immigration and Customs Enforcement).

Rizkana, I. and Seeher, J. (1987), Maadi I. The Pottery of the Predynastic Settlement (Mainz am Rhein: Philipp von Zabern).