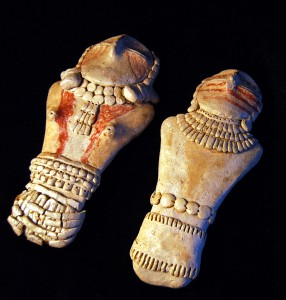 A Fremont Culture figurine stolen from the collection of a Utah museum and anonymously returned nearly four decades later.

The so-called Fremont Culture lived in the Utah region from approximately 700 to 1300 AD. The culture, which was contemporaneous to the more famous Ancient Pueblo/Anasazi culture to the south, is defined by a number of similar material cultural traits including gray ware pottery and distinctive basketry and petroglyphs.

Discovery of the Pilling Collection

In March 1950 a rancher named Clarence Pilling (along with his brothers Art and Woodrow and ranch hands Dusty Pruitt and Tony Finn) discovered eleven clay figurines in a rock overhang while searching a side canyon of Range Creek, Utah for lost cattle (College of Eastern Utah Prehistoric Museum n.d.; Lobell 2012; Maffly 2012). The figurines were found lying in a row, uncovered and visible in a slight recess four feet above ground level (Morss 1954: 3). Pilling brought the figurines to a family friend named Geneve Oliver who took them to Neil Judd at the Smithsonian and then to Noel Morss at Harvard’s Peabody Museum.

The figurines are now commonly called ‘Pilling Figurines’ or the ‘Pilling Collection’ and the site they were found at is referred to as the ‘Pilling Site’ or ‘Pilling Cave’ (College of Eastern Utah Prehistoric Museum n.d.). The figurines were officially the property of the Pilling family but eventually became federal property and were placed under the care of the College of Eastern Utah’s Prehistoric Museum, where they remain (Maffly 2012).

Description of the Pilling Figurines and site

Noel Morss of the Peabody Museum inspected the figurines and then visited the site where he made some preliminary archaeological and geological observations (Morss 1954: 3). The figurines are between four and six inches long and are made of unbaked clay (Opsahl 2012). They are decorated with applied clay ornaments and red, buff and black paint (Morss 1954: 3; Opsahl 2012). Excluding the applied ornaments, the figurines were constructed all as one piece without the addition of temper (Morss 1954: 4). The backs of the figurines are undecorated (College of Eastern Utah Prehistoric Museum n.d.). Morss believed that the figurines were meant to be seen from the front and, because their applied decorations were so fragile, they could not have been carried around or attached to a person nor could they have been tied to anything in a vertical position (Morss 1954: 6).

The figurines appear to be organized into six matched pairs of male and female ‘mates’ (Morse 1954: 6; Vo-Duc 2012). The females have breasts and wider hips and wear aprons and the males wear breechclouts or kilt-like skirts, which may represent fringed leather (Morss 1954: 4–5). A twelfth figurine presumably did not survive to be found by Pilling, meaning that there is one more female figurine than male figurine (College of Eastern Utah Prehistoric Museum n.d.). Based on iconographic idiosyncrasies, Morss determined that the figurines were all made by the same artist, but were not necessarily made at the same time (Morse 1954: 6; Lobell 2012). However, he felt it was probable that each figure of a ‘couple’ were constructed together (Morss 1954: 6).

The Pilling Site itself is an irregular area that is about 100 feet long and twelve feet wide at its broadest point (College of Eastern Utah Prehistoric Museum n.d.). The remains of an oval shaped room with a stone foundation and wooden superstructure were found at the site (Morss 1954: 3). A number of well-preserved timbers from this structure were still in situ when Morss visited in the early 1950s (Morss 1954: 3). The figurines were found associated with other objects and appear to have been deliberately placed below a poorly-preserved petroglyph of a stylized human figure (College of Eastern Utah Prehistoric Museum n.d.; Vo-Duc 2012). The petroglyph was rendered in white paint with an inverted trapezoidal head, broad shoulders, a flaring base, and without arms or legs (Morss 1954: 3).

The figurines have been on public display in various locations since shortly after they were found. Throughout the 1950s, 1960s, and 1970s the Pilling Collection was displayed in a number of banks, courthouses, and hotels in Utah. In 1973, the figurines were displayed at the Zions First National Back, Carbon-Emery Division, in Price, Utah (Lobell 2012). A photograph of this exhibition published in the Deseret Magazine showed all eleven figurines (Lobell 2012). In 1974 the figurines were on display in the College of Eastern Utah (now Utah State University Eastern) Prehistoric Museum, also in Price (Lobell 2012). Only ten of the figurines made it to that exhibition. One of those ten figurines had broken in half meaning that there still seemed to be eleven pieces in the collection. This may have caused some confusion and the loss of the eleventh figurine went unnoticed for some time (Maffly 2012).1

Morss designated the missing figurine, one of the males, as ‘No. 2’ (Morss 1954: 6). The figurine is decorated with a spotted line of red paint on the forehead and three horizontal lines of red paint under the eyes. It wears ear ornaments, a necklace of three tiers of pierced pendants, a discoid belt, and a fringed ‘kilt’ (Morss 1954: 6).

In November 2011, a small box was delivered to the office of Bonnie Pitblado, an anthropologist at Utah State University. The box had been hand-delivered to Pitblado’s assistant by an anonymous person and contained what appeared to be a Fremont Culture figurine in the style of the Pilling Collection pieces along with a typed note (Opsahl 2012; Lobell 2012). The note stated that:

‘Sometime between 1978 and 1982 I came into possession of this piece by way of a vagabond acquaintance. He had told of ‘acquiring’ it near Vernal, Utah. I have great interest and respect for this continent’s native culture and have always hoped to somehow return this to wherever it had come from. It has rarely been out of the soft leather covering I put around it and have kept it in the condition in which I received it.

Recently in conversation I mentioned its existence to a friend and told of my desire to find its original home, they offered to help and were able to find that it may be the missing piece of the Pilling Figurine set. I am very excited at the prospect of it being returned to its proper place. Thanks to all who are involved in making this happen.’ (as printed in Maffly 2012).

Pitblado has had no interaction with the person who returned the figurine. She believes that the person may wish to remain anonymous because of recent federal raids of Utah-based antiquities looters (from Maffly 2012).

Scientific analysis of the figurines

A preliminary comparison of photographs of the complete Pilling Collection and the artifact delivered to Pitblado hinted at a possible match with the missing eleventh figurine (Lobell 2012). Fearing that the object might be a fake, Pitblado sought the expertise of multidisciplinary group of scholars to confirm the figurine belonged with the Pilling Collection. James Adovasio, a textile expert from Mercyhurst College, confirmed that the artist who made the figurines placed them on baskets to dry. After examining the female ‘mate’ of the missing figurine and the figurine delivered to Pitblado, he found the basket impression patterns to be the same, a feature that he believes could not have been faked (Lobell 2012).

X-ray fluorescence confirmed that both the clay and the pigments found on the Pilling Collection pieces and the figurine sent to Pitblado share the same geochemical signature (Lobell 2012). In other words, the clay and pigment used to make all eleven figurines, including the one delivered to Pitblado, came from the same source. Furthermore, the signature of the returned figurine is more like that of the ‘mate’ of the missing figurine than any other figurine in the Pilling Collection (Lobell 2012).

Steve Nelson, a geochemist at Brigham Young University, used a scanning electron microscope to confirm the presence of a lacquer called ‘alvar’ on the returned figurine (Lobell 2012). This is significant because it is known that in 1950 all eleven figurines were treated with this substance while they were being studied at the Peabody Museum (Morss 1954: 4; Lobell 2012).

Molly Boeka Cannon of Utah State University’s geospatial anthropology lab (also called the Utah Crime Lab) ran forensic fingerprint tests on prints found embedded in the clay of the figurines (Opsahl 2012). These prints are thought to be ancient. No definitive match was found between the prints embedded in the returned figurine and the remaining ten figurines from the Pilling collection as most of these prints had been purposely smoothed over by the artist who made the objects (Opsahl 2012).

Based on the results of these scientific analyses, the returned figurine is considered to be the missing artefact from the Pilling Collection. It is now on display at the Utah State University Eastern Prehistoric Museum along with the other ten figurines in the Collection. The rock shelter on which the figurines were found has since collapsed but archaeologists have located other Fremont cultural features near the Pilling Site (College of Eastern Utah Prehistoric Museum n.d.). The circumstances of the theft of the eleventh Pilling Figurine and the identity of the person who returned it remain unclear.

This case study is a good example of the fractured chains of provenance cultural objects can have in the market, disappearing and resurfacing with no verifiable information about all or part of their periods off the public record, the ease with which knowledge of an object’s true importance can be wiped out by a loss or theft, and the subsequent lack of knowledge on the part of private buyers as to what it is they are actually buying.

1. Several news sources state that the figurine was ‘lost’ sometime in the 1960s (for example Maffly 2012). However, the presence of photographs (it won’t let me put a comment here, but is there a source for the photographs that can be mentioned here?) of a complete collection in 1973 and a collection minus the one figurine in 1974 point to the presumed theft of the figurine between those two exhibitions.