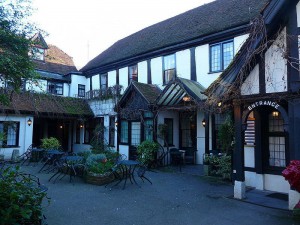 In the summer of 1988, following correspondence concerning a collection that had recently come onto the market, Lord Alistair McAlpine, who at the time was an antiquities dealer based in London and also a Conservative member of the House of Lords, showed Dr Ian Stead from the British Museum twenty-two miniature bronze shields (Hobbs 2003: 144; Stead 1998: 13-14).

At first, the provenience of these objects was unknown to the British Museum staff (British Museum 2012). However, despite this lack of provenience, the British Museum decided to purchase the artefacts anyway due to their rarity and significance (Stead 1998: 16). After some negotiation, McAlpine sold the shields to the British Museum for £55,000 (Donegan 1995). Different suggestions had been made about the possible county of origin for the artefacts, including Dorset and Gloucestershire (Stead 1998: 16-17). Not long after the acquisition, rumours also began circulating that a discovery had been made of 1,500 bronze objects, including miniature shields (Hobbs 2003: 145).

Over the next few years, Stead and others tried to find out more about the mystery hoard (or hoards, as they could be; it was still unclear at this stage whether more than one hoard had been found due to the numbers of finds being discussed), then in December 1992 a breakthrough occurred. David Keys, a journalist with The Independent who had also been following the case, received a telephone call from one of the finders (Stead 1998: 27). Through further negotiations, the finder, who called himself ‘John of Salisbury’, was persuaded to meet Ian Stead at the Red Lion hotel in Salisbury, Wiltshire (Stead 1998: 29). Elaborating on details he had revealed to Keys, ‘John’ showed Stead photographs of the finds, one of which was later located in McAlpine’s catalogue (Stead 1998: 30). ‘John’ wished to sell the remainder of the artefacts that were still in his possession (some of which he had brought to the meeting in the Red Lion), including a razor, several socketed axes and two miniature cauldrons, to the British Museum for £20,000 (Stead 1998: 30-31).

‘John’ would not reveal his true identity to Stead. However, over the course of investigations, which by this time involved Detective Chief Inspector Jack Woods of Holborn police in London, who had a particular interest in and knowledge about archaeology and antiquities (Stead 1998: 44), it was established that ‘John of Salisbury’ was in fact James Garriock (Stead 1998: 42), a metal detecting enthusiast from Salisbury.

On 22 October 1993, Stead again arranged to meet Garriock (‘John’), along with Stuart Needham, also from the British Museum, once more at the Red Lion. Garriock thought he was meeting to negotiate a possible sale to the Museum of the Salisbury artefacts in his possession; he had by now lowered his asking price from £20,000 to £10,000 (Stead 1998: 48). However, the meeting was in fact set up to facilitate his arrest for handling stolen goods (Stead 1998: 51). Later that day, Garriock’s associate and fellow metal detecting enthusiast, Terry Rossiter, was also arrested at his home in Salisbury (Stead 1998: 52). Rossiter led Stead, Needham, and the police officers into the field and showed them the find spots. It was also established that the landowners, on the outskirts of Salisbury, had not given permission for their land to be searched. Nor were they aware of the discovery that had been made (Stead 1998: 52-53).

The investigation and subsequent trials revealed that the Salisbury Hoard had been found on 23 February 1985 (Stead 1998: 90). The finders, Garriock and Rossiter, had the artefacts photographed by another metal-detector user,  apparently for the photographs to form a memento of the discovery (Stead 1998: 65). Garriock contacted John Cummings, an antiquities dealer from Lincolnshire, not long after this, and Cummings paid £10,500 for the majority of the collection (Horsnell 1995a). Some artefacts were kept back by the two finders (Stead 1998: 65), and a small selection were given to the photographer, which he subsequently sold (Stead 1998: 36). The artefacts circulated among different dealers and collectors, for example through informal networks at coin fairs and other dealer events (see Stead 1998: 36-37). Some of these apparently passed to McAlpine (Stead 1998: 36), while other potential Salisbury Hoard artefacts surfaced at auction houses such as Christie’s in 1990, and were exported to Salt Lake City, USA (Stead 1998: 78). Others entered the collections of museums such as Devizes Museum in Wiltshire, who purchased their artefacts from a London antiquities dealer (Stead 1998: 18-20).  A further fourteen items were listed for sale in the catalogue for Christie’s (South Kensington) Antiquities and Souvenirs of the Grand Tour sale of 27 October 1993. Lot 12 comprised eleven ‘bronze items’ with the provenance described as, ‘said to have been found in a well in Gloucestershire’ (Christie’s 1993: 8), and with publication in an Ashmolean Museum Exhibition catalogue of some of the collection of Lord McAlpine (MacGregor 1987). Lot 15 comprised ‘two silvered bronze socketed axe heads… …and another similar’, with no provenance listed. Pre-sale estimates for the two lots were £150-250 and £200-300 respectively (Christie’s 1993: 8). These objects had been put into auction by McAlpine, but following discussions with Stead about the importance of keeping the objects together he subsequently had them withdrawn from sale (Stead 1998: 42-43).

Garriock and Rossiter were tried in 1995, as was Cummings, who was tried for dishonestly receiving stolen artefacts (Horsnell 1995b). Garriock and Rossiter both pled guilty to theft (Horsnell 1995b), while charges against Cummings were dropped (Stead 1998: 99). Subsequent archaeological fieldwork led by Stead confirmed the location of the hoard’s discovery, and shed light on the nature and size of the Salisbury Hoard. For one thing, the initial rumours of 1,500 or so artefacts were shown to be an exaggeration, with the actual hoard size closer to 600 artefacts (Hobbs 2003: 147). The artefacts, from both the Bronze and Iron Ages, were buried around 200 BC (Stead 1998: 123), by which time some of them would already have been antiquities in their own right. This sheds important light on the understanding of society in the British Iron Age and ‘the notion of time and the idea of antiquity’ as understood by that society (Renfrew 1998: 10, and see Stead 1998: 109-124).

Around a third of the total artefacts from the Salisbury Hoard remain unaccounted for (Stead 1998: 149), having been sold on without trace. Although Lord McAlpine was able to show he had no awareness that the artefacts he had sold to the British Museum had been stolen (Horsnell 1995a), he later closed his antiquities business in light of his experiences with the Salisbury Hoard (Alberge 1998).

The Art Newspaper criticised the British Museum for initially purchasing the miniature shields, given their unknown origins (Alberge 1998), and one of the British Museum trustees even went on record as saying that ‘the Museum may have been wrong to purchase them for so large a sum in the first place’ (Renfrew 1998: 9). The landowner passed away in 1994 and the British Museum later returned the artefacts to his daughter (Horsnell 1995a), subsequently buying them back from her. They were unsuccessful in obtaining any financial recompense from McAlpine (Renfrew 1998: 9). Hence, the British Museum in effect bought and paid for the same collection of artefacts twice over, ‘at the expense of the public purse’ (Brodie 1999, 236).

The case of the Salisbury Hoard is particularly significant due to the efforts made by British Museum staff and others to follow up and establish precisely where the hoard had come from and what stages had been involved in its transition from the ground to the antiquities market. This is particularly the case for Stead, who was at the time in charge of Iron Age antiquities in the Department of Prehistoric and Romano-British Antiquities (Stead 1998: 11). Stead’s notes of the whole experience were written up into a comprehensive book covering the various stages involved, from when the first artefacts were offered for sale to the British Museum through the arrests and trials to the eventual excavations and analysis of the artefacts (Stead 1998). Of particular note is the chart he developed, illustrating the routes of distribution of some of the Salisbury Hoard artefacts (Stead 1998:74, and see illustration). 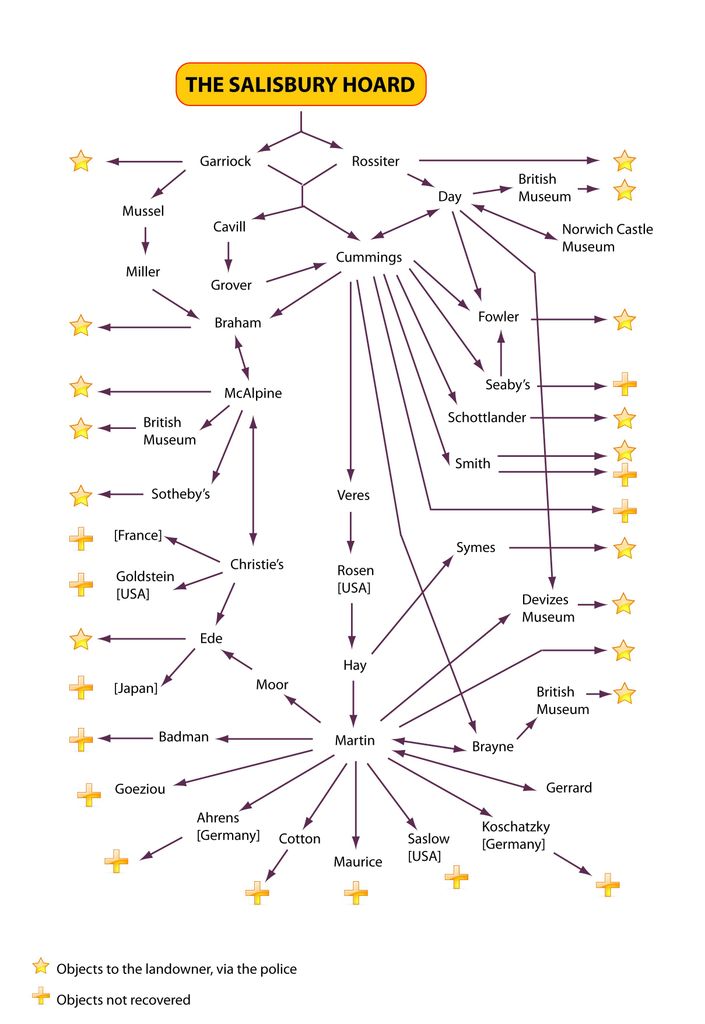 MacGregor, Arthur (1987) Antiquities from Europe and the Near East in the Collection of the Lord McAlpine of West Green, Oxford, Ashmolean Museum.