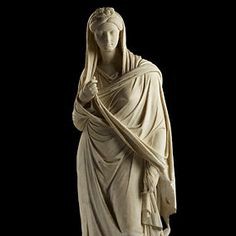 Just before the beginning of the 1974 football World Cup, hosted by Germany, the Greek dealer Nikolas Koutoulakis was informed of an impressive haul of antiquities that was about to appear in the market (Silver, 2010: 110). Among them was the statue of the Empress Vibia Sabina, wife of the Emperor Hadrian (117–138 AD) The over-life-size statue (2.04 m in height), which ‘may be dated to after the Empress’s death in 136 A.D’ and “possibly comes from Hadrian’s villa at Tivoli” (Gavrili, Godart and De Caro, 2008: 190), was kept in the warehouse of a Turkish dealer in Munich. Koutoulakis asked Giacomo Medici to check the object for him, since Medici was scheduled to be in Munich on 15 June to watch the football match between Italy and Haiti. After the match Medici visited the warehouse and took three Polaroid images (Silver 2010: 110), depicting the statue still covered with soil, lying on a wooden pallet on the floor, near other antiquities (Tsirogiannis 2013: 23–24, App. 1). Medici kept the Polaroid images in his archive and reported back to Koutoulakis on the condition of the statue.

After the raid of the Medici warehouses by the Swiss and Italian authorities on 13 September 1995 (Watson and Todeschini 2007: 54; 66–79), the three Polaroid images were discovered as part of a huge archive of images and documents. Italian archaeologists Maurizio Pellegrini and Daniela Rizzo identified the statue depicted in the three Polaroids as the one exhibited in the Boston Museum of Fine Arts (Watson and Todeschini 2007: 354). On September 28, 2006, the Boston Museum of Fine Arts signed an agreement with the Italian Ministry of Culture for the return of thirteen antiquities, among which was the statue of Vibia Sabina (Silver 2010: 263).

Tsirogiannis, Christos (2013b), Nekyia. From Apulia to Virginia: An Apulian Gnathia Askos at the Virginia Museum of Fine Arts. Journal of Art Crime, 10, 81–86.