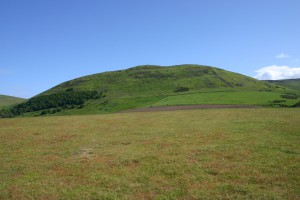 The Iron Age hillfort site at Yeavering Bell, one of the hills in the Cheviot range in Northumberland, ‘was almost certainly constructed at some point in the first millennium BC’ (Oswald and Pearson 2005: 98). It stands in close proximity to the Anglo-Saxon palace site of Ad Gefrin, a factor that possibly reinforced the significance of the palace (Frodsham 2005: 14).

Although in the stewardship of Northumberland National Park, the site belongs to landowner Lord Anthony Hill, who at the time said “National Park Staff have worked closely with local landowners over the last ten  years or so through projects like  ‘Discovering our hillfort Heritage’ to set up some really good management  agreements  for ancient monuments. These guarantee public access to many sites where it was previously impossible. Activity like this threatens all of that good work” (in Young 2002). The illicit searching of the site may have had a negative impact for the legal metal detecting community, with reports just a few years later from local metal-detector users that it was extremely difficult to gain permission to metal detect from landowners in Northumberland (Thomas 2006: 255).

The site, which had never been excavated previously, was “left pitted with dozens of holes” (Kennedy 2002a) – a total of 34 (Kennedy 2002b) . The quantity and quality of material that was looted cannot be known, although anecdotal evidence from the time suggests that some ‘lesser’ metal material was left discarded on site (Kennedy 2002b).

Although those responsible were never caught or prosecuted, the incident made national news at the time (e.g. Kennedy 2002b). Not unlike the events at Wanborough and its contribution to the development of the Treasure Act, the nighthawking incident at Yeavering Bell was utilised as evidence to support the passing of a change to UK law, in this case the Dealing in Cultural Objects (Offences) Bill. As Richard Allan, the Member of Parliament who proposed the Bill in the House of Commons as a Private Members Bill, remarked during Standing Committee F debate of the Bill:

‘If, as happened recently at Yeavering Bell in Northumbria, detectorists from the wrong side of town, commonly known as nighthawks, deliberately metal detect on the sites of ancient monuments … …and try to sell what they find, anyone who buys it will be caught under the Bill.’

This Private Members Bill was adopted by the Government after the looting of the Iraq National Museum in 2003 (Stone 2005: 941), and was eventually passed and enacted as the Dealing in Cultural Objects (Offences) Act 2003 (and see Mackenzie 2007; Mackenzie and Green 2009, for more on this Act).

Frodsham, Paul (2005), ”The Stronghold of its own Native Past’: Some Thoughts on the Past in the Past at Yeavering’, in Paul Frodsham and Colm O’Brien (eds.), Yeavering: People, Power and Place (Stroud: Tempus), 13-64.

Mackenzie, Simon (2007), ‘Dealing in Cultural Objects: a New Criminal Law for the UK’, Amicus Curiae: Journal of the Society for Advanced Legal Studies, 71, 8-18.

Mackenzie, Simon and Green, Penny (2009), ‘Criminalising the Market in Illicit Antiquities: an Evaluation of the Dealing in Cultural Objects (Offences) Act 2003 in England and Wales’, in Simon Mackenzie and Penny Green (eds.), Criminology and Archaeology: Studies in Looted Antiquities (Oxford: Hart).