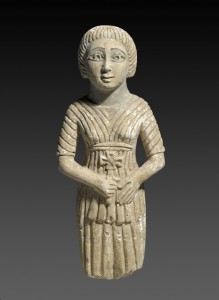 Fakes and reworked pieces (repainted, recarved, or altered in modern times in some other way) are a constant danger in the art and antiquities trade, often assisted in going unnoticed or unchallenged by the lack of provenance or provenience common across the market (Brodie 2012: 235). Coptic Art, although appearing in collections of numerous museums such as the Metropolitan Museum in New York or the Louvre (Kruglov 2010: 2), has nonetheless been regarded as a genre of art with limited market demand compared to other types of art and antiquities. This observation has been used in the past  by some observers to reject the possibility of there being many fakes, on the ground that it would not be sufficiently profitable to produce them – an assertion rejected by others (Spanel 2001: 93-94).

The term ‘Coptic Art’ refers to artistic material produced in Egypt from the 3rd to the 8th Centuries AD (Kruglov 2010: 1), with objects such as stone reliefs ‘made for use in pagan and Coptic Christian cemeteries as well as in Christian churches and monasteries’ (Brooklyn Museum 2012). Hence, examples of Coptic Art can exhibit both Christian and pagan influences (Bailey 2008a: 3).

In the aftermath of World War II, Coptic Art began to appear more frequently on the art and antiquities market, especially from the late 1950s to the 1970s (Bailey 2008a: 1; Taylor 2008). Many pieces were published (and hence seemingly authenticated) by specialists and acquired by museums (Russmann 2009).  The majority of the examples appearing on the market – aside from around 1,000 pieces known from earlier archaeological excavations (Bailey 2008a: 3) – seem to have come from a small number of dealers in New York and Switzerland (Taylor 2008), seemingly with no provenance information in most if not all cases (Spanel 2001: 90).

One of the museums to invest in a large number of Coptic artefacts in this period was the Brooklyn Museum in New York. This came to be regarded as one of the largest collections in the world and the second largest in the USA (Bailey 2008a: 1), until many of its pieces were uncovered as fakes (Kruglov 2010: 1). Currently one third of the current collection (ten out of thirty objects) is believed to be fake (Bailey 2008a: 1; Taylor 2008), with many more in the collection identified as verfälschte Stücke; faked works: ‘…in contradiction to absolute fakes… … [a] term for ancient but severely recarved and repainted pieces’ (Kruglov 2010: 3).

The fakes are believed all to originate in the village of Sheikh Ibada in Egypt (Bailey 2008a: 3), possibly the work of just a handful of sculptors (Spanel 2001: 94). Suggestions that all was not well with the emerging examples of Coptic Art that many collectors and museums had been buying up, now often referred to collectively as the ‘Sheikh Ibada group’, were first seen in print in 1963 when art historian John Beckwith expressed concern about the group’s authenticity (Ibid. 92). However, it was in 1977, when Gary Vikan drew attention to the possible nature of the suspect sculptures, albeit in an unpublished format (Bailey 2008a: 3; Spanel 2001: 89), that a wider awareness of the presence of fakes came about. Interestingly, many of the confirmed forgeries deal with Christian themes, suggesting to some that this was a response to a market demand for Coptic material that favoured Christian imagery over pagan (Bailey 2008a: 1).

As well as the Brooklyn Museum, many more museums are also affected. The Recklinghausen museum in Germany has been acknowledged to be the museum most affected by the problem of fake Coptic Art (Bailey 2008b). Furthermore, it has been suggested that some forgeries may also be found within Egyptian museums, for example at the Coptic Museum (Spanel 2001: 94).

In 2009, the Brooklyn Museum displayed its Coptic Art collection, including the known fakes and reworked and repainted pieces, in a temporary exhibition titled “Unearthing the Truth: Egypt’s Pagan and Coptic Sculpture” (Brooklyn Museum 2012; Russmann 2009), which as a key component of its theme highlighted in no uncertain terms which of artefacts were fake and which were not. This was heralded as an unusual move (Taylor 2008). Others have questioned the extent to which yet more examples in the museum’s collection may also be faked or reworked (Kruglov 2010).