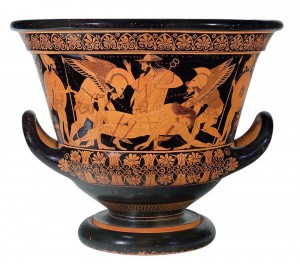 The Euphronios (Sarpedon) krater is a red-figure calyx krater made in Athens circa 515 BC, 46 cm high and 55 cm in diameter, signed by Euxitheos as potter and Euphronios as painter. It is decorated on the front with a scene depicting the death of Sarpedon, who is attended by Hypnos and Thanatos with the god Hermes looking on. On the reverse are three Athenian youths arming themselves for battle. It was bought by the Metropolitan Museum of Art in 1972 for the then record-breaking price of $1 million, and is thought to have been excavated illegally in Italy in 1971. The Metropolitan’s director at the time, Thomas Hoving, described it as ‘ … a work that would force the history of Greek art to be rewritten’ (Hoving 1993: 318). In 2006, the Metropolitan restored ownership of the krater to Italy.

The find spot and early provenance of the Euphronios krater have never been firmly established. However, the krater is generally believed to have been discovered in December 1971 by tombaroli digging illegally on private land in the Greppe Sant’Angelo area of the Etruscan cemetery of Cerveteri (Silver 2009: 287-90). The tombaroli are said to have sold the krater to Giacomo Medici for something in the region of $88,000, with Medici, in turn, arranging for the krater to be smuggled into Switzerland, where he sold it to Robert Hecht for $350,000 (Silver 2009: 37-52, 287-90). By this time, the krater was in a fragmentary though completely restorable state, so Hecht left it with Fritz Bürki in Zurich for restoration. The provenance of the krater after its arrival in Zurich is well-documented. In February 1972, Hecht alerted the Metropolitan Museum to the existence of the krater with a letter to Dietrich von Bothmer, the Metropolitan’s Curator of Greek and Roman Art. In June 1972, von Bothmer, along with Hoving and Hoving’s deputy Theodore Rousseau, visited Zurich to view the krater (Hoving 2001a). In August 1972, after some haggling, the Metropolitan agreed to buy the krater from Hecht for $1 million (Hoving 2001b). The money was raised through the sale of the Durkee and Ward collections of 11,000 coins and medals which had been donated to the Metropolitan in the early twentieth century. Sotheby’s agreed to handle the coin sale and offered the Metropolitan a $1.5 million payment in advance, plus 84 percent of all gross receipts in excess of $1 million (Hoving 2001b). The Metropolitan ultimately received nearly $2.3 million from the coin auctions (Hoving 1993: 316). The krater arrived in the US on 31 August 1972.

Hecht claimed to be acting on ten percent commission as agent for the krater’s owner, whom he identified as Lebanese collector and dealer Dikran Sarrafian (Hoving 2001b). Hecht supplied two documents of provenance for the acquisitions committee meeting that approved the purchase. First was a letter dated 10 July 1971, written by Sarrafian to Hecht, in which Sarrafian declared that he would deliver the vase to Hecht in expectation of a final sale price of $1 million. Second was another letter from Sarrafian to Hecht, dated 9 September 1972, stating that Sarrafian’s father had obtained the krater in 1920 in London and that because it was in fragments it had been sent [to Switzerland] for restoration three years before the writing of the letter (Hoving 1993: 319; Hoving 2001c).

On 12 November 1972, the New York Times announced the krater’s acquisition with a cover story for its Sunday magazine (Mellow 1972). The price and provenance of the krater were both withheld, with the Metropolitan claiming that it was maintaining secrecy in order to protect a potential source of future acquisitions (Gage 1973b). On 19 February 1973, however, a more critical account of the krater’s provenance was published (Gage 1973a), heralding a series of articles that questioned the museum’s account and suggesting instead that the krater had been excavated illegally at Cerveteri in late 1971. The names of Hecht and Sarrafian leaked out and the $1 million price tag was revealed (Gage 1973b). It was during this time in a TV interview that Hoving referred to the krater as the ‘hot pot’—a name that stuck (Hoving 2001c).

The new and potentially damaging allegations of illicit provenance caused the Metropolitan to send lawyers to visit Sarrafian in Beirut (Hoving 2001d). They obtained documents from Sarrafian confirming that he had received payment for the krater of $909,000 in Swiss francs on 25 October 1971. They also obtained testimony from a clerk who had seen the vessel in fragments with Sarrafian in Beirut in the early 1960s. The Metropolitan’s legal team also collected affidavits from Bürki, confirming that he had received a fragmentary krater from Sarrafian in August 1971, and a photographer in Basel who had seen the fragments in September 1971 (Gage 1973c; Hoving 1993: 333; Hoving 2001d). This evidence was made public in June 1973, and seemed to confirm that the krater was in Switzerland before the suggested December 1971 date of illegal excavation, as well as refute allegations of illicit provenance (Gage 1973c).

In July 1973, Hoving received a copy of a letter that art collector Muriel Newman had sent Sarrafian stating that she had seen a fragmentary Euphronios vessel with him in Beirut in 1964. Newman subsequently signed an affidavit confirming this statement (Hoving 1993: 335-6; Hoving 2001d).

Thus by the end of 1973, the question of provenance seemed settled in favour of the Hecht/Metropolitan account of Sarrafian’s ownership, and thus legitimate provenance. Hoving has since written, however, that in private, he still harboured doubts. This was largely because, in various statements, Sarrafian had referred to the krater as comprising a hatbox of fragments and implying that it was incomplete (e.g. Gage 1973b, 1973c; Gelder 1973; Hoving 2001d, 2001e). The krater bought by the Metropolitan was complete, and was considered by Hoving to be too large, even in fragments, to have fit into a hatbox. Hoving resigned from the Metropolitan in 1977, but by 1993 he had come to believe that there were in fact two Euphronios kraters: one that had been illegally excavated in 1971 and subsequently acquired by the Metropolitan, and a second less-well-preserved one that had been in the possession of Sarrafian as claimed and documented, but that had subsequently turned up the collection of Bunker Hunt (Hoving 1993: 338-9, 2001e). Hecht had simply taken the provenance and documentation from the Sarrafian/Bunker Hunt krater and attached it to the illegally-excavated and better-preserved Sarpedon krater bought by the Metropolitan. Sarrafian had been killed in a car crash in 1977 (Hoving 2001d), and so was unavailable for further comment. When challenged by Hoving about this switch, Hecht himself was ambivalent (Hoving 2001e). This second krater, however, was bought by Leon Levy and Shelby White in 1990, and returned to Italy in 2010 when evidence emerged that it too had been illegally excavated (Povoledo 2008b). If Sarrafian did indeed possess a Euphronios krater, as the evidence collected by the Metropolitan suggests, then its identity and whereabouts remain unknown.

Matters rested there until the Italian investigations of Giacomo Medici and Robert Hecht gained momentum though the 1990s and early 2000s. Two photographs were discovered in Medici’s Geneva storerooms, apparently taken in May 1987, one showing Medici standing next to the Euphronios krater on display in the Metropolitan, the second showing Hecht in a similar pose (Watson and Todeschini 2007: 107). On 16 February 2001, the Carabinieri raided Hecht’s apartment in Paris. They recovered a handwritten ‘memoir’ of Hecht’s, setting out an autobiographical account of his life in the antiquities trade. It contains two accounts of the Sarpedon Euphronios: the first admitting to the fact that Hecht had bought the krater from Medici and that it had been excavated illegally in 1971; the second reiterating the Sarrafian provenance as provided to the Metropolitan. Finally, in June 2001, Marion True of the J. Paul Getty Museum informed Italian investigators in a sworn deposition that van Bothmer had pointed out to her on an aerial photograph the location of the looted tomb from which the krater was allegedly taken, though von Bothmer subsequently denied this allegation (Felch and Frammolino 2005; Felch and Frammolino 2011: 209, 211; Watson and Todeschini 2007: 206-7).

On 3 February 2006, the Metropolitan reached an agreement with Italy about the return of twenty objects, including the Euphronios krater. Although the evidence for illegal excavation and trade was still largely circumstantial, the Metropolitan’s director Philipe de Montebello clearly thought it was convincing when he was quoted as saying that it was ‘highly probable’ that the vessel had been stolen from an Etruscan tomb (Kennedy and Eakin 2006). The krater arrived back in Italy on 18 January 2008, where it was put on display with other returned objects at the exhibition Nostoi: Capolavori Ritrovati, before being curated permanently at the Villa Giulia in Rome (Povoledo 2008a).

Gage, Nicholas (1973a), ‘How the Metropolitan acquired “the finest Greek vase there is”’, New York Times, 19 February. http://graphics8.nytimes.com/packages/pdf/arts/Metacquired.pdf, accessed 19 July 2012.