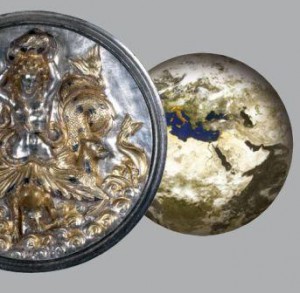 The Hellenistic settlement of Morgantina was founded around 1000 BC (Wilkerson 2001: 64), part of the ancient Kingdom of Syracuse (Stille 1999: 58). It is in central Sicily, close to the modern town of Aidone, however its exact location was lost for many years.

Morgantina declined rapidly after supporting, Carthage in the Second Punic War in 211 BC (Singleton 2006). The exact location of the city was then not rediscovered until 1955, when archaeologists from Princeton University found various artefacts and remains including a die marked ‘MGT’ for Morgantina; the first evidence to emerge of the settlement’s location (Carroll 2002).

For years the excavations have continued at Morgantina, led by American universities including Princeton University but later also the University of Virginia and Wesleyan University (Bell 2002: 201), but always with an awareness that tombaroli were also at work.

It is believed that in around 1979-1980, the Morgantina silver, sometimes referred to as the Morgantina Treasure  (Steele 2000), was removed from the site  by looters possibly using metal detectors (Fleishman 2000). The silver, consisting of 16 pieces including two small silver horns (Stille 1999: 63) and an emblem depicting the sea monster Scylla in sculptural relief (Singleton 2006), was then probably smuggled into Switzerland in around 1981 (Brodie 1998: 7). The New York Metropolitan Museum of Art acquired the silver in two lots over 1981 and 1982 from the antiquities dealer Robert Hecht, for a total sum of $2.7 million (Blouin Art Info 2010). The chain of events leading from the looting of the silver from Morgantina to its acquisition by the Met has been summarised by Peter Watson and Cecilia Todeschini (2006: 106), based on information received from the Carabinieri Art Squad:

“The route was as follows: Vincenzo Bossi and Filippo Baviera, tombaroli in Enna, sold the silver for 110 million lire ($27,000) to Orazio Di Simone, a Sicilian middleman based in Lugano in Switzerland, who sold it for $875,000 to Robert Hecht, who sold the silver to the Metropolitan Museum for $3 million[1].”

In 1984 Dietrich von Bothmer, the Met’s curator also connected with the acquisition of the Euphronios Krater , gave the silver preliminary publication in the museum’s Bulletin (Bell 2002: 202), with only vague details as to its possible provenance (Singleton 2006). The first of several proposals to return the silver was made four years later in 1988 when the provenience of the silver had been identified as Sicily (Bell 2002: 202). This was the year after Malcolm Bell, the university archaeologist in charge of ongoing excavations at Morgantina, had first seen the silver pieces on display in the Met and wrote to the museum explaining his suspicions that the artefacts had originated in Morgantina (Stille 1999: 63).

In the following years, Bell made several requests to view the silver, the first being in 1993, which was refused by the Met (Stille 1999: 64); such a refusal of a request from a serious scholar being considered “almost unheard of” (Hundley 2000). Evidence given by local tombaroli including Giuseppe Mascara (Stille 1999: 64), who was arrested  in 1996 and disclosed information about the looting of the Morgantina silver in an attempt to shorten his sentence (Singleton 2006), included the alleged find spot of the silver (Eakin and Povoledo 2006). This led to a further representation to the Met by the Italian government using the testimony gathered from the tombaroli. However, the Met’s executive vice president, Ashton Hawkins, “informed the Italians that the museum could not rely on the word of a convicted looter trying to reduce his sentence” (Stille 1999: 64). Meanwhile, the Italian government  had in the same year asked Bell to carry out investigations to attempt to pinpoint the site of the looting (Wilkerson 2001), and in 1997 and 1998 excavations were carried out by Bell and the US expedition to Morgantina at “the Greek house where the treasure was originally found” (Bell 2002: 203). The team discovered in the floor of the house two holes that corresponded with the size of the hoard as purchased by the Met, including in one of the holes a 1978 Italian coin that helped support the suggested date of the looting (Wilkerson 2001). That the Met purchased the silver in two lots seemed to support the suggestion that the treasure was found on two different occasions, resulting in the two separate holes that were discovered by the excavation (Singleton 2006). Also discovered was a bronze coin that was minted between 214 and 212 BC, which corresponded to the date when Morgantina was known to have been attacked (211 BC) and would support the notion that the silver may have been concealed around this time so as to avoid its theft or destruction during the conflict (Bell 2002: 203).

In 1999, Bell was finally permitted to view the Morgantina silver at the Met, and was convinced of the true provenance of the hoard, to the extent of translating the Greek inscription found on two of the vessels  as ‘of Eupolemos’, a name already associated with Morgantina from other data found at the site (Singleton 2006). This differed from the Met’s own translation by von Bothmer of the inscription as ‘from the war’; a term almost identical to the possessive of Eupolemos in the Ancient Greek (Watson and Todeschini 2006: 106).

It took several more years for the Italian government and the Met to reach an agreement with regard to the final destination of the Morgantina silver, with Philippe de Montebello, then the director of the Met suggesting in a letter in 2003 to Giuliano Urbani, then the Italian Culture Minister, “that the museum might be willing to cede title to the 15 pieces of silver if it were allowed to keep the set for 25 more years” (Eakin and Povoledo 2006). It was not until 2006 that an agreement was finally reached, which covered other repatriation claims as well as the Morgantina silver, including the Euphronios Krater, a Laconian kylix and three examples of red-figured pottery (Metropolitan Museum 2006). The agreement, signed on the 21 February 2006, allowed for the Morgantina silver to remain in New York on loan and on display until January 2010 (Povoledo 2006), but also for the Met to be provided with loans of ‘comparably great works of ancient art’ (Metropolitan Museum 2006) from Italy for its displays. Upon returning to Italy, the Morgantina silver went on display in Rome (CBSNews 2010), then Palermo (Gallo 2010), and finally the museum in Aidone. Aidone is expected to benefit economically from the recent repatriation not only of the Morgantina silver, but also of two acrolithic sculptures formerly in the possession of collector Maurice Tempelsman, and the ‘Getty Aphrodite’; all three of which sculptures are believed also to have been looted from Morgantina (Blouin Art Info 2010).

Fleishman, Jeffrey (2000), ‘Italy crusades for the return of plundered antiquities’, The Inquirer, 8 August.

Hundley, Tom (2000), ”Tomb robbers’ alive and getting very rich in Italy as museums, auction houses and private collectors turn a blind eye, the trade in stolen antiquities flourishes, with New York as a major center for buying the treasures’, Chicago Tribune, 2 July.

Metropolitan Museum, of Art (2006), ‘News Release: Statement by the Metropolitan Museum of Art on its agreement with Italian Ministry of Culture’, Communications Department, 21 February, http://www.metmuseum.org/about-the-museum/press-room/news/2006/statement-by-the-metropolitan-museum-of-art-on-its-agreement-with-italian-ministry-of-culture, accessed 03/08/2012.

Singleton, Maura (2006), ‘Plunder: The theft of the Morgantina silver’, The University of Virginia Magazine, Spring 2006.

[1] Presumably the final figure here is rounded up from the $2.7 million quoted in other sources.