Also known as: Cult Statue of a Goddess & Morgantina Venus 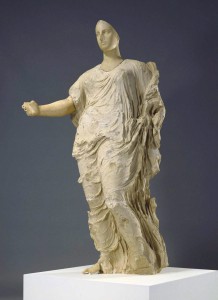 The statue is thought to have been excavated illegally in 1977 or 1978 from or close to the ruins of the fifth- to first-century BC town of Morgantina in Sicily, and to have passed through the hands of Sicilian antiquities dealer Orazio di Simone (Felch and Frammolino 2011: 101-3; Frammolino and Felch 2007). In March 1986, London dealer Robin Symes bought it for $400,000 from Swiss resident Renzo Canavesi, who provided a statement claiming that it had been in his family’s possession since 1939 (Brand 2007: 2; Felch and Frammolino 2011: 108, 148; Frammolino and Felch 2007). By that time, the statue had been purposefully broken into three parts to facilitate its illegal transport from Italy to Switzerland. Symes sold the statue to the Getty in 1988 for $18 million, saying that it had formerly belonged to a supermarket magnate and collector in Chiasso, Switzerland (Brand 2007: 2; Felch and Frammolino 2011: 101; Frammolino and Felch 2007).

In 1988, an Italian investigation into illegal antiquities’ excavation in Sicily was inconclusive as regards the Aphrodite, though testimony obtained from local dealer Giuseppe Mascara suggested that the statue had been discovered at the same time as a group of three marble heads, one of which probably belonged to the statue, and a set of silver vessels (the Morgantina silver) (Brand 2007: 2; Felch and Frammolino 2011 103-5; Frammolino and Felch 2007). In 1989 charges were brought against di Simone, who was by that time living in Switzerland, but they were dismissed in 1992 because of lack of evidence (Felch and Frammolino 2011 108-10; Frammolino and Felch 2007). In 2001, Canavesi was found guilty in absentia of receiving stolen property and was sentenced to two-years imprisonment and fined the equivalent of $18 million, though the conviction was thrown out upon appeal because of an expired limitation period (Brand 2007: 3; Carroll 2001).

In 1996, Canavesi approached the Getty directly with a view to selling some ‘missing pieces’ of the statue, sending copies of photographs showing the statue in pieces before its cleaning and restoration. In 2006, private investigators hired by the Getty as part of a broader investigation into Getty acquisitions and acquisition practices visited Canavesi and inspected the photographs, which were dated to the early 1980s (Brand 2007: 2; Felch 2011; Felch and Frammolino 2011: 277-88; Frammolino and Felch 2007). In 2006, in view of the evidence assembled during its investigation, the Getty agreed to consider returning the Aphrodite to Italy, and in 2007 convened a seminar of international experts to consider its possible find spot (Greenberg 2007). On 31 July 2007, the Getty included the statue on a list of forty objects to be returned to Italy (Getty 2007). The statue arrived back in Italy in December 2010 and in March 2011 it was installed in the museum of Aidone, the modern town closest to the ruins of Morgantina (Frammolino and Felch 2011: 308).

Brand, Michael (2007), ‘Introduction’, in Mark Greenberg (ed.), Cult Statue of a Goddess: Summary of Proceedings from a Workshop Held at the Getty Villa May 9, 2007 (Los Angeles: Getty Publications), 1-3.