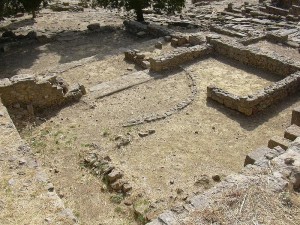 It refers primarily to ‘tomb-robbers’ operating in Italy (Mackenzie and Green 2009: 3), although the term ‘clandestini’ (meaning ‘illegals’ or ‘clandestines’ in Italian) has also been used to describe clandestine diggers (Renfrew 2000: 17), and a tombarolo might not necessarily limit their activities only to tombs and graves; for example sometimes removing material from villas and other sites (Watson and Todeschini 2006: 151).

Elia (2001: 151) notes that many tombaroli are often ‘full-time looters’, concurred with by Draepler et al, who also described local tomb robbers in Puglia (Apulia) as ‘professional’ (1993: 32). Watson and Todeschini, in their investigations, noted that some tombaroli ‘receive regular salaries rather than being paid only for their discoveries’ (2006: 337). It can also act as a supplementary income, or as an alternative to the less lucrative but legitimate forms of employment available in some areas (van Velzen 1996: 113), and in some regions, such as Sicily, treasure hunting is viewed as ‘an acceptable means by which individuals can improve their financial status in the community’ (Migliore 1991: 165).

The serious scale and nature of the looting that has taken place (and continues to take place) across Italy relates in part to the desirability of the archaeological heritage that can be discovered. For example, Apulian vases have experienced great popularity and frequency in antiquities sales at auction houses (Watson 1997: 59). The activities of tombaroli have been connected to wider organised crime networks, such as the Mafia in Sicily (Stille 1999: 61). These links have tended to be made by journalists, with academic researchers being more ambivalent and circumspect about the weight of evidence around organised crime involvement in looting and trafficking antiquities.

Watson and Todeschini (2006) have described the extent to which the entire chain of looting in and trafficking out of Italy has operated (from tombaroli to intermediaries, smugglers, restorers, dealers, and other agents), for example through the discovery of the Organigram. Ruiz (2000) has also described the ‘illicit network’ in which tombaroli work, including the role of the intermediary/receiver (in Italian, a ‘ricettatore’), who deals with moving the artefacts discovered by tombaroli to buyers outside of Italy, through their own networks of contacts. Ruiz noted too that many tombaroli have their own teams of workers or henchmen, and exercise control over key sources of information and artefacts.

van Velzen, Diura T. (1996) ‘The world of Tuscan tomb robbers: Living with the local community and the ancestors’, International Journal of Cultural Property, 5, 111-26.