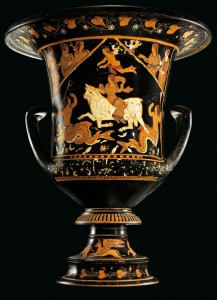 On 7 November 2005, responding to approaches made by the Italian Ministry of Culture, the J. Paul Getty Museum agreed to return three objects to Italy (Getty 2005):

Stone stela with Greek funerary inscription. Said to be from Selinunte in Sicily.

Etruscan candelabrum (90.AC.17). Stolen from the Guglielmi Collection and sold to the Getty in 1990 by Atlantis Antiquities (proprietors Robert Hecht and Jonathan Rosen) for $65,000 (Watson and Todeschini 2007: 84-7). Marion True had first seen this candelabrum together with its companion tripod in 1987 in the possession of Giacomo Medici and Robert Hecht (Felch and Frammolino 2011: 153).