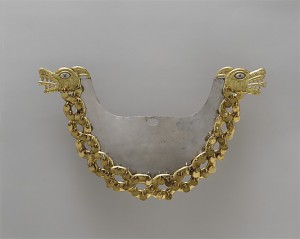 A Moche or Vicús cultural site that was heavily looted in the 1960s and 1970s for metal objects, many of which are now in the Metropolitan Museum of Art, New York.

The site of Loma Negra is located in Peru‘s upper Piura Valley, 2.5 km east of kilometer 972 North on the Pan American highway. In 1969 looters located the cemetery at Loma Negra (Lechtman et al. 1982). Hundreds of Moche or Vicús metal artefacts were looted from an undetermined number of deep shaft tombs (Shimada 1994: 75). The cultural attribution of these objects is controversial to some degree. They have been attributed to the Vicús Culture, the Moche Culture, or some sort of combination of the two. Due to the looted nature of the corpus, little can be determined about Moche/Vicús interaction in the Loma Negra region.

According to the provenance notes on the website of the Metropolitan Museum of Art, most of the Loma Negra material they received by way of The Museum of Primitive Art was purchased from the Andre Emmerich Gallery, New York, in 1969. Other pieces are recorded as being purchased from dealers Juan Luis Pereira, Leon J. Buki (Miami, FL) or Alan C. Lapiner by Arnold L. and Jane Costello Goldberg as early as 1969 and 1970 (Metropolitan Museum of Art n.d.).