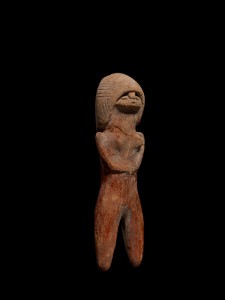 The Valdivia Culture occupied Ecuador’s western lowlands and coast from about 4400 BC to 1450 BC based on radiocarbon dates (Zeidler 2008). Beyond the type-site of Valdivia, discovered in 1956 by Ecuadorian archaeologist Emilio Estrada, archaeologists have identified a number of Valdivia cultural sites, including San Pablo, Real Alto and Salango on the coast, and Loma Alta, Colimes, and San Lorenzo del Mate inland. At the time of the culture’s discovery, Valdivia’s pottery sequence was considered to be the oldest in the New World. The advanced age of Valdivia ceramic technology combined with observed similarities of vessel forms, inspired archaeologist Betty Meggers to argue that Valdivia had direct contact with Jomon Period Japan (Zeidler 2008). Most archaeologists do not believe that there was trans-Pacific contact between the Valdivia and Japan, yet because of these suggestions, Valdivia is more familiar to non-archaeologists than other Ecuadorian cultures.

Despite the controversy concerning Valdivia pottery, the culture is best known for its ceramic ‘Venus’ figurines, stone sculptures sometimes called ‘plaques’, and stone mortars with animal features (which some argue should be assigned to the later Chorrera culture), mostly produced from around 2300 to 2000 BC. The ultra-stylised zoomorphic/anthropomorphic iconography of the objects appealed to the artistic sensibilities of the 1950s and 1960s and mirrored some of the artistic trends of the age. On the art market, stone Valdivia sculptures are commonly compared to the sculptural work of Constantin Brâncuşi and Henry Moore.

Looters discovered many (if not most) Valdivia cultural sites before archaeologists did. Compared to the well studied cultures of neighbouring Peru, Ecuador has garnered a relatively smaller amount of international research focus and funding which limited the amount of internal archaeological survey that was historically accomplished. Although identified as a culture in the 1950s, many of the largest Valdivia sites were not surveyed by archaeologists until the 1970s, after looters had already been through them. By the late 1970s, Valdivia sites had taken on a pitted ‘mine field’ quality. Valdivia itself, which turned out to be a peripheral or secondary site, was apparently so looted that in 1980 it was difficult to find part of the original mound that had not been significantly altered by the activity. Further archaeological work at the site was seen as futile (Rex González 1980).

Damp (1984) records that local huaqueros knew the archaeology of the region ‘intimately’. At the time of Damp’s paper, looters concentrated their efforts on the “U-shaped” early Valdivia sites and all but ignored non-‘U-shaped‘ middle Valdivia sites, asserting that there was “nothing [sell-able] in them” (Damp 1984). Huaquero knowledge was such that many Valdivia sites were located by archaeologists based on their investigations into looted objects that had appeared on the market. An example offered by Rex González (1980): in the late 1970s the Museo Banco Central in Quito, which, at the time, had a policy that allowed it to purchase looted material in an attempt to keep Ecuadorian objects in Ecuador, was offered a number of exceptional Valdivia sculptural pieces. By questioning the dealers, authorities were able to locate a Valdivia site near the town of San Isidro. The main mound at San Isidro and the smaller mounds in nearby agricultural fields were already covered with looter’s holes by the time archaeologists arrived.

Just as problematic as the looting of Valdivia sites is the ‘corrupted’ corpus of Valdivia sculptural objects that exist in international collections. Bruhns and Hammond (1983) assert that the number of Valdivia figurines in international collections does not seem to match the frequency in which these figurines have been encountered in archaeological excavations. In other words, there are far more Valdivia figurines in collections than there should be, based on estimated knowledge of the extent of past looting and the likely amount of material that looting will have produced. Furthermore, the extensive variations on the figural themes that are seen on the art market are not seen within archaeological contexts (Bruhns and Hammond 1983; Bruhns and Kelker 2010: 114). Telling the difference between real and fake Valdivia figurines is nearly impossible (Bruhns and Kelker 2010: 114).

Upon visiting the site of Valdivia in 1980, Bruhns and Hammond encountered locals selling faked Valdivia figurines as real (Bruhns and Hammond 1983). Meggers confirmed that the faking of Valdivia figurines began during her excavations in the mid-1950s, the result of a practical joker who sought to ‘salt’ archaeological digs with fakes (Bruhns and Hammond 1983). Bruhns and Hammond report that the potter hired to make the original fakes continued to craft Valdivia pieces in a process that included grinding up ancient sherds for temper to improve coloration. Other fakers began producing figures and the results are available to both tourists and dealers in Ecuador’s major cities[1]. Some speculate that fakes appear in major western collections as well.

Valdivia figures are a good example of the problems associated with the rapid looting of sites unknown to archaeologists. Much like the famous Cycladic figurines, the number of Valdivia figurines excavated from archaeological contexts is very small compared to the number that have appeared on the market with no contextual information. That, coupled with the known presence of an unknown number of forgeries makes even an iconographic survey of Valdivia pieces difficult or impossible. Conclusions drawn from either the limited number of figures from archaeological contexts or the general (and corrupted) corpus of figures in international collections are inherently flawed.

[1] Bruhns and Hammond were writing in the 1980s, however Valdivia fakes sold as real to tourist continues (for example, see Bruhns and Kelker 2010: 113-116). The author was sold a Valdivia fake being touted real in Otavalo in 2007.