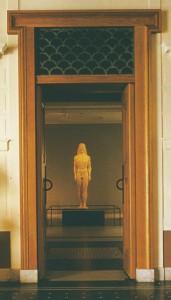 The kouros was acquired on loan for approval by Getty curator Jiri Frel from Gianfranco Becchina in September 1983. There was no clear find spot for the piece, though it was said to have been in the possession of Swiss resident Jean Lauffenberger since 1930 and came accompanied with a documentary provenance comprising letters written to Lauffenberger as long ago as the early 1950s testifying to his ownership (Hoving 1996: 299). After inspection by more than thirty experts, and despite reservations about the statue’s proportions and possible stylistic anachronisms, the Getty decided the statue was genuine (Hoving 1996: 279-98; Lapatin 2000: 45-6). A crucial finding was the discovery, based on scientific analysis of the statue’s surface, that the magnesium component of the dolomitic marble (calcium magnesium carbonate) had leached out, a process which it was believed could only have occurred naturally and over a period of centuries (Lapatin 2000: 47; True 1987: 11). The purchase of the kouros for $9.5 million was approved in January 1985 (Felch and Frammolino 2011: 62-4), and announced publicly in 1987 by the then-curator Marion True (True 1987). Soon after its acquisition, however, it was denounced as a fake (Hoving and Norman 1987).

A subsequent investigation of the letters said to constitute provenance revealed them to be forgeries (Hoving 1996: 302-3; Kimmelman 1991; Lapatin 2000: 44). Then, in 1990, scholar and antiquities dealer Jeffrey Spier published an article revealing the existence of a fake kouros torso, which resembled in anatomical rendering and proportions the Getty kouros. It had been suggested to Spier that both pieces were fabricated in the early 1980s—products of a Rome workshop and even carved from the same block of marble (Spier 1990: 630-1). It was also established around the same time that magnesium could in fact be removed artificially from dolomitic marble, and that its absence should not be taken as a reliable indication of authenticity (Kimmelman 1991; Lapatin 2000: 47).

With a discredited provenance, and doubts accumulating over the status of the kouros itself, in 1992 the Getty transported it to Greece where it formed the centrepiece of an international colloquium convened with the intention of deciding once and for all the question of its authenticity. Unfortunately, the nineteen invited experts, including scientists and connoisseurs, were unable to arrive at a consensus decision (Bianchi 1994; Kokkou 1993). In 2012 the kouros was described on the Getty Museum’s website as ‘Greek, about 530 BC, or modern forgery’.

Since the Athens colloquium, it has been claimed that the alleged forger Fernando Onore sold the kouros to an intermediary in Calabria, who in turn sold it to Becchina for $100,000 (Felch and Frammolino 2011: 334, note 40). If the statue is a fake, it is not known whether Becchina was aware of this, though the Getty has never since done business with him (Felch and Frammolino 2011: 334, note 40). 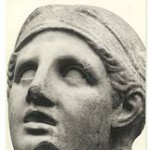