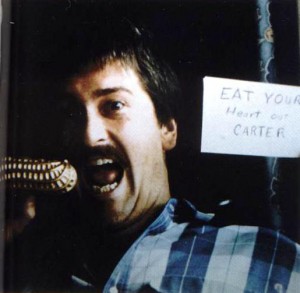 In 1987, the Moche site of Sipán in Peru was looted and objects taken from that site began to appear on the black market. Kirkpatrick (1992: 240) interviewed a Peru-based collector named Enrico Poli who claimed that word of the major find reached Lima collecting circles quite soon after the tomb was located. After intermediaries in Trujillo sent him artefact samples from Sipán (which Poli purchased), he travelled to Trujillo with $40,000 in cash. There Poli claims to have met with a former policeman and artefact middleman named Pereda who sold him several objects from the tomb. Pereda informed Poli that more artefacts from the site existed, but that the looters were hiding the objects until police investigations had ended. While at Pereda’s house, Poli claims to have seen crutches belonging to a man named Fred Drew. Over the next few days it has been alleged that the Bernal brothers brought various Sipán objects to Pereda’s home where they were purchased by either Drew or Poli (Atwood 2004: 46-48). Fred Drew was a retired American diplomat who had been functioning as a buyer and dealer of Peruvian antiquities for about 20 years before the Sipán looting (Kirkpatrick 1992: 74). Drew purchased large portions of the Sipán collection with money provided by a US antiquities dealer named David Swetnam. With Drew focusing on the procurement of the Sipán objects, Swetnam devised a way for the pieces to be transported illegally out of Peru.

Smuggling route through Bolivia and Canada

According to the testimony of Michael Kelly (a member of the smuggling operation, see below), Drew and Swetnam had worked together to smuggle antiquities out of Peru in the past. Kelly alleged that Drew and Swetnam would normally have agents carry smaller antiquities on direct flights from Lima to the US, sometimes bribing Peruvian customs officers in the process (Atwood 2004: 82). For larger shipments, mud and latex were used to cover genuine antiquities and ‘Hecho en Bolivia’ was stamped on the bottom in an attempt to make them look like souvenir items. The disguised antiquities would be shipped overland to Bolivia, flown to Vancouver, and then carried into the United States (Atwood 2004: 83). This route worked for at least two shipments of non-Sipán material, but in 1985 a collection of ceramics and textiles sent by Drew and Swetnam was intercepted and authenticated by Canadian authorities. In evaluating how to get the Sipán material out of Peru, Swetnam decided that the Bolivia to Canada to the US route was ‘no longer viable’ (Kelly quoted in Atwood 2004: 83).

Via London to the USA with a false provenance

Drew and Swetnam eventually settled upon the following route which they had previously tested with two smaller shipments of non-Sipán antiquities. Drew handed the Sipán objects that he purchased over to Miguel de Osma Berckemeyer, the nephew of a former Peruvian ambassador to the United States. Berckemeyer then used family and drug cartel connections to get the objects on cargo planes headed to London. At Heathrow airport the objects were picked up by representatives of Fine Arts Services, a bonded warehouse agent, and delivered to Swetnam (Kirkpatrick 1992: 100).

Once the Sipán material was in the United Kingdom, Swetnam removed the Peruvian newspapers that were used to pack the objects and replaced them with pages from a London paper. He packed the objects in a footlocker and covered them with a raincoat belonging to the father of a man named Michael Kelly. Kelly, a British ex-pat who was the director of a small California-based company called Art Collections Conservation Network, was to receive the footlocker full of Sipán objects when they arrived in the USA. Kelly’s recently deceased father was a British subject who had travelled in South America in the 1920s. If asked, Kelly was to claim that the Sipán objects had been collected by his father during his travels, providing a plausible false provenance for the shipment. Letters bearing this story were also sent to potential buyers within the US (Kirkpatrick 1992: 102).

Both Swetnam and Kelly were present to pick up the shipment of Sipán material at Los Angeles International Airport (Kirkpatrick 1992: 122). The shipment was labelled ‘personal effects’ and Swetnam and Kelly paid no duty on it. Customs agents did not look inside the footlocker. The men transported the Sipán objects to the home of Benjamin Bishop Johnson, a collector, dealer, and authenticator of Pre-Conquest antiquities. Johnson authenticated the shipment and purchased at least some of the items (Atwood 2004: 85).

Kelly testifies to US Customs resulting in raids

On 18 September 1987, Kelly contacted United States Customs agent Gaston Wallace and indicated that he had played a role in the trafficking of a large shipment of undocumented antiquities into the United States (Kirkpatrick 1992: 143). Kelly claimed that he got involved with Swetnam because his business was near bankruptcy (Atwood 2004: 84). When his father died in 1986, Kelly was unable to pay for airfare back to the UK for the funeral. Swetnam offered to pay for Kelly’s plane tickets if Kelly agreed to collect illegally exported Peruvian objects in London and provide a false provenance based on his father’s death (Atwood 2004: 84). Although Kelly admitted that he knew he was joining a smuggling operation, he stated that he did not know how deeply he was getting involved until he saw the undocumented antiquities from the Sipán shipment. He agreed to become a confidential informant and a federal investigation was initiated.

On 30 March 1988 US Customs conducted a series of raids on targets identified through secret recordings made by Kelly. Among the properties raided was the home of retired Crocker Bank executive Charles Craig in Santa Barbara. Papers found in Craig’s home led investigators to the Santa Barbara Museum of Art. There investigators found twenty objects that had been in Swetnam’s inventory and another seven that Kelly identified as having been smuggled into the US by himself and Swetnam (Atwood 2004: 87; Kirkpatrick 1992: 170). Several of these objects thought to be from Sipán were slated to be put on display at the museum two days after the raid in an exhibit entitled ‘Diverse Directions: A Collector’s Choice’(Atwood 2004: 87; 285). Thus within four months of being removed from the ground, objects from Sipán would have been placed on view in a US museum.

In 1989 David Swetnam and his wife Jacqueline were charged with ten counts of conspiracy, customs violations, and other smuggling charges. Swetnam agreed to plead guilty to three counts of receiving and causing the importation of nine artefacts in an agreement that involved the charges against his wife being dropped (Kirkpatrick 1992: 190). On 26 June 1989 Swetnam was sentenced to six months in prison. He served four months of the sentence (Atwood 2004: 87).